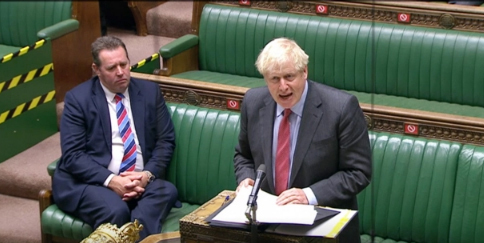 LONDON:British Prime Minister Boris Johnson told people on Tuesday to work from home where possible and ordered restaurants to close early to tackle a fast-spreading second wave of COVID-19 with restrictions lasting probably six months.
After government scientists cautioned that deaths may soar without urgent action, Johnson stopped short of another full lockdown as he did in March but said further action could be taken if the disease was not suppressed.
“We reserve the right to deploy greater firepower, with significantly greater restrictions,” Johnson told parliament following emergency meetings with ministers and leaders of the United Kingdom’s devolved governments.
“We will only be able to avoid it if our new measures work and our behavior changes.”
He said Britain had reached a similarly perilous point as countries like Spain and France.
“We will spare no effort in developing vaccines, treatments and new forms of mass testing but unless we palpably make progress, we should assume that the restrictions I have announced will remain in place for perhaps six months.”
Just weeks after urging people to start returning to workplaces, Johnson advised office workers to stay at home if they could. He ordered all restaurants and other hospitality sites to close at 10 p.m. from Thursday with only table service allowed.
“I am sorry this will hurt many businesses just getting back on their feet,” he said.
Face masks will be required in more settings, businesses who break rules will be fined, and there will be tougher enforcement against people who do not comply, he said, while the military could be brought in to help free up the police.
However, schools and universities will stay open.
The extra measures come after government advisers said new cases could reach 50,000 per day by mid-October.
The United Kingdom already has the biggest official COVID-19 death toll in Europe – 41,788 – while it is borrowing record amounts to pump emergency money through the damaged economy.
Bank of England Governor Andrew Bailey warned that the “very unfortunate” escalation of COVID-19 cases threatened the economic outlook and said the central bank was looking hard at how it could support the economy further.
Opposition leader Keir Starmer urged the government not to end a furlough scheme at the end of October, accusing it of losing control of the coronavirus crisis.
“We will not listen to those who say let the virus rip, nor to those who urge a permanent lockdown,” Johnson said.
“We are taking decisive and appropriate steps to balance saving lives and protecting jobs and livelihoods.”

LAST ORDERS
Pubs and other entertainment and leisure venues will have to shut at 10pm from Thursday evening onwards.
Ministers think that Belgium – which has introduced the curfews already – have been successful in curbing their spread.
They won’t be able to open between 10pm and 5pm – but takeaway venues can continue as usual.
Pubs and other restaurants and cafes will have to offer table service by law, too.
The PM warned: Boris: “What we’ve seen from the evidence, and alas, the spread of the virus spreads more later in the night when more alcohol has been consumed.”

WORK FROM HOME
People who can work from home effectively should return to doing to, Boris confirmed today in a huge u-turn for the Government.
Just weeks ago they were telling people to go back into the office in a bid to save thousands of jobs.
The PM said, however, that “in key public services – and in all professions where homeworking is not possible, such as construction or retail – people should continue to attend their workplaces”.

NO SHIELDING
Boris confirmed today that vulnerable people won’t need to shield again yet.
Unless they are living in local lockdowns, they don’t need to return to staying indoors at all times, he said.

BRING IN THE ARMY
Police can draw on “military support” if they are too busy enforcing the coronavirus rules, the PM said today.
It means they could be drafted in to help backfill roles.

COVER UP
The fines for not wearing a face mask will double to £200, Boris said today.
And people working in restaurants, bars and other hospitality venues will be ordered by law to wear them.
People taking taxis will also have to cover their face on their ride.

SMALL WEDDINGS ONLY
Weddings will be banned from holding more than 15 people together at a time from Monday, Boris said.
Ceremonies and receptions with up to 30 can go ahead for this weekend, however.
Boris Johnson speaking with Michael Gove and Matt Hancock after Cabinet

Indoor sport which breaks the rule of six will be banned from Thursday too.
Exemptions will be ditched to tighten up the rules and stop the spread of the virus in certain settings.
The planned return to the live Premier League matches which was due to take place on October 1 was also ditched today.
This morning Boris gathered his top team for a Cabinet meeting to discuss the new rules.
And he held a COBRA meeting with the leaders of the devolved administrations, too.
It’s expected that Scotland, Wales and Northern Ireland will follow suit with new rules.
Nicola Sturgeon will give a statement to the Scottish Parliament later today.