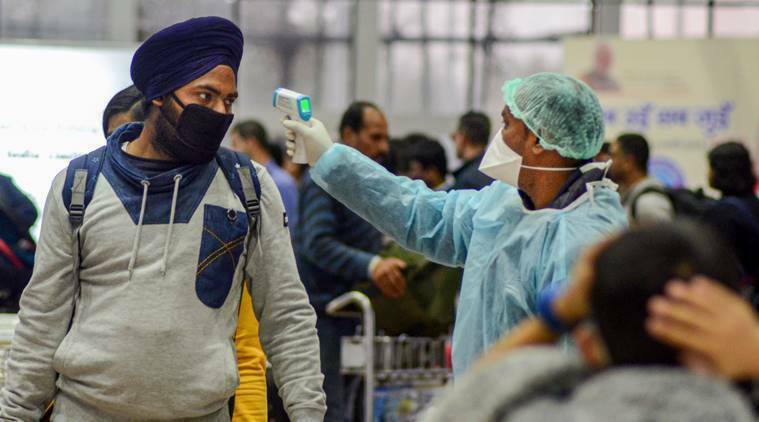 NEW DELHI: India on Wednesday suspended all visas, except a few categories such as diplomatic and employment, till April 15 to prevent the spread of coronavirus as 10 new cases were reported taking the total number of patients in the country to 73.

As the infection continued to spread its tentacles in the country, state governments and Union territories took a number of preventive measures.

The decision on suspension of visas was taken at a meeting of a group of ministers held here under the chairmanship of Health Minister Harsh Vardhan.

“All existing visas, except diplomatic, official, UN/International organisations, employment and project visas, stand suspended till 15th April 2020. This will come into effect from 1200GMT on 13th March 2020 at the port of departure,” an official statement said.

All incoming travellers, including Indian nationals, arriving from or having visited China, Italy, Iran, Republic of Korea, France, Spain and Germany after February 15 will be quarantined for a minimum period of 14 days, the statement said.

As preventive measures, the Jammu and Kashmir administration ordered closure of primary schools and aganwadi centres and shutting down of cinema halls across the region till 31 March, while the Karnataka government issued temporary regulation which asked all government and private hospitals to have flu corners for screening of suspected cases of COVID-19.

According to the regulation, no person/institution shall use print or electronic media to spread mis-information on COVID-19 without prior permission of the Department of Health & Family Welfare.If a person is found indulging in any such activity, they will be punished, it said. The Karnataka government also started a campaign called ‘Namaste over Handshake’ that encourages people to greet in the traditional Indian style, to tackle the spread of the virus.

As the cases of the infection continued to swell with over 119,400 confirmed cases reported globally so far out of which over 4,300 people have succumbed to the virus, India prohibited entry of any international cruise ship, crew or passenger with a travel history to coronavirus-hit countries post February 1, 2020 to its major ports till March 31.

To prevent the spread of the deadly virus, the Ministry of Shipping said it will allow only such international cruise ships which had intimated their call to ports by January 1, 2020.

The government said international cruise ships will be allowed only at ports having thermal screening facilities for passengers and crew members.

Among the fresh cases, eight were from Kerala and one each from Delhi and Rajasthan since Tuesday, the Union health ministry said and gave state-wise breakup which included five (Delhi), nine (Uttar Pradesh), four (Karnataka) and two in Ladakh.

While the Union ministry maintained that there are two confirmed cases of the infection in Maharashtra, the state health officials put the number to seven.

Rajasthan, Telangana, Tamil Nadu, Jammu and Kashmir and Punjab have reported one case each, the ministry said, adding Kerala has till now reported 17 cases, including the three patients who were discharged last month following recovery.

Two employees working with IT companies Dell and Mindtree have been tested positive for coronavirus, according to company statements. However, their locations were not disclosed.

The Dell employee had returned from the US, including a visit to Texas while the Mindtree employee also had a travel history abroad, the two companies said in separate statements.

Making a statement in Rajya Sabha, External Affairs Minister S Jaishankar said the situation in Italy and Iran is “a cause of great concern” and the government is making all efforts to bring back Indians after appropriate testing and screening.

He said a medical team will leave for Italy tomorrow for screening Indians.

Noting that the disease has spread to about 90 countries, Jaishankar said if the government starts the process of bringing back Indians worldwide, then it will be only add to the panic.

An Air India flight carrying 83 people, including nine foreigners of Indian origin, arrived here on Wednesday from Italy and have been quarantined at the Army facility in Manesar near Delhi, officials said.

The evacuees will be monitored for two weeks by a qualified team of doctors and staff members, to watch for any signs of infection.”If any individual is suspected to be infected, he/she will be shifted to an isolation facility,” an official added.

Daily medical examination of all 83 people will be done at the facility, they said.

The first batch of 58 evacuees from Iran had arrived on Tuesday with 25 men, 31 women and 2 children on board and all evacuees are asymptomatic at present, the ministry said.

A two-day conference organised by the Delhi-based Institute of Defence Studies and Analysis (IDSA), which was to start from Thursday, has been postponed due to the coronavirus threat.

Union Health Minister Harsh Vardhan, who spoke to a few COVID-19 patients admitted at Medanta and Safdarjung hospitals through video calls on Tuesday, said all those infected by the disease were stable and showing signs of recovery.

So far, India has evacuated 948 passengers from COVID-19 affected countries. Out of these, 900 are Indian citizens and 48 belonging to different nationalities including Maldives, Myanmar, Bangladesh, China, USA, Madagascar, Sri Lanka, Nepal, South Africa and Peru, it said.

The ministry further said that a total number of 10,57,506 passengers have been screened so far at the airport.