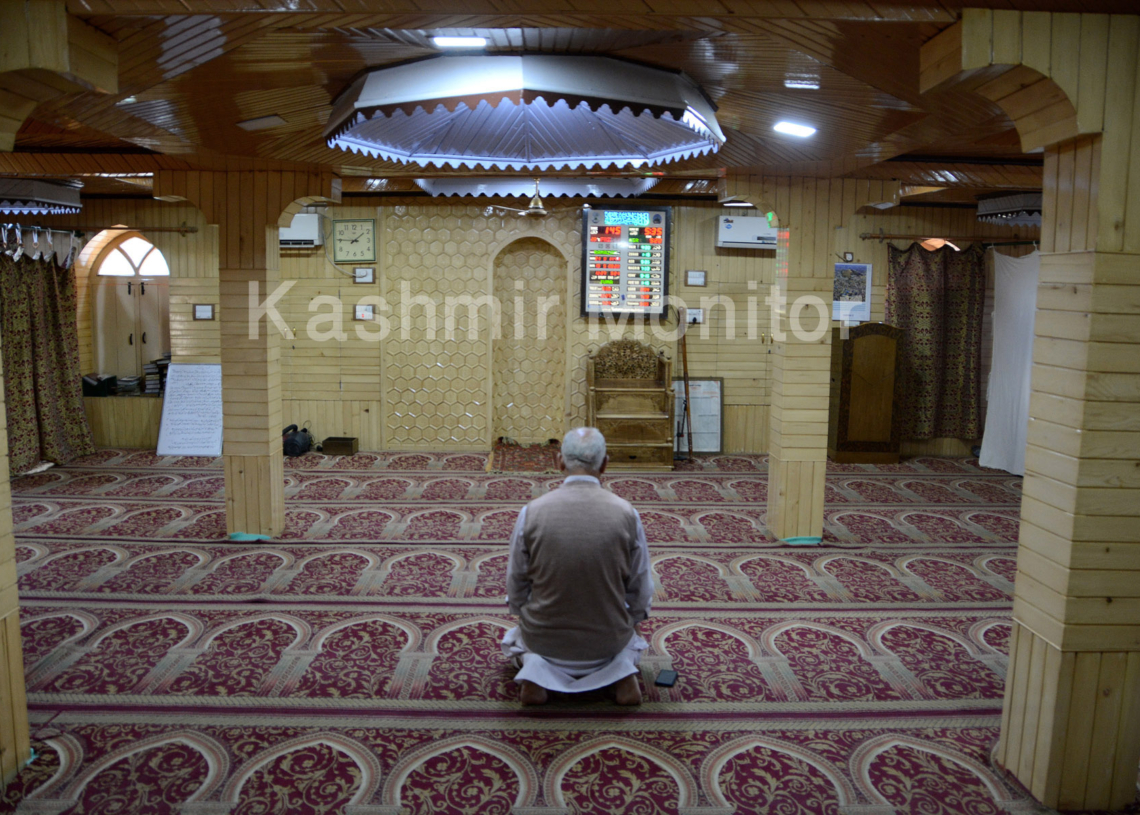 A man offering prayers alone at a Mosque on the third Friday of holy month of Ramadhan 2020 - File Photo: KM/Umar Ganie

Srinagar: Kashmir’s Grand Mufti Nasir-ul-Islam while felicitating the people of Jammu and Kashmir on the auspicious occasion of Jumat-ul-Vida (last Friday of Ramadan) and Laitul-Qadr the night of blessings, Monday said that since lockdown has been extended and Covid-19 continues to hold its tight grip on Kashmir, people must offer prayers on Jumat-ul-Vida and Shab-e-Qadr in their homes.

He, however, said that on the occasion of Eid-ul-Fir, people belonging to Red Zones and Hot spots should offer four Rakah Nimaz-e-Chast instead of Eid prayers and those belonging to Green Zones can offer Eid prayers in playgrounds while following proper protocol including wearing face masks and maintaining proper social distancing.

Mufti Nasir said that people of Kashmir have been largely following the guidelines to prevent the spread of deadly virus but since three sacred occasions Shab-e-Qader, Jumatul Vida, and Eid-ul-Fitr people are coming people are requested to not to gather in large numbers.

“On the eve of Shab-e-Qadr, people must offer night long prayers and prayers for repentance at their respective homes. Same should be followed on Jumat-ul-Vida—instead of two Fardh Rakahs, people should offer Zuhr prayers as has been the practice in the fasting month due to the pandemic,” he said. On the night of Shab-e-Qadr and Jumatul Vida, Imams of local masjids may recite prayers for repentance on loudspeakers while people should respond to same from their homes.

On Eid eve, people of Red Zones and hot spots must stay home and offer four Rakahs of Nimaz-e-Chasth instead of two rakahs of Eid prayers, since there is no substitute to Eid prayers. “People living in Green Zones and in areas where there has been no Covid case reported so far, should offer Eid prayers immediately after Sun Rise in small open areas with small gatherings of nearby neighbours while maintaining social distancing and that wearing of face masks should be strictly followed,” he said.

He said that people should refrain from unnecessary spending on Eid eve and instead celebrate Eid in a very austere manner. At the same time, the Grand Mufti said that people who have not paid Sadakatul Fitr and Zakah so far, must pay it immediately so that poor and destitute too buy necessary things before Eid.