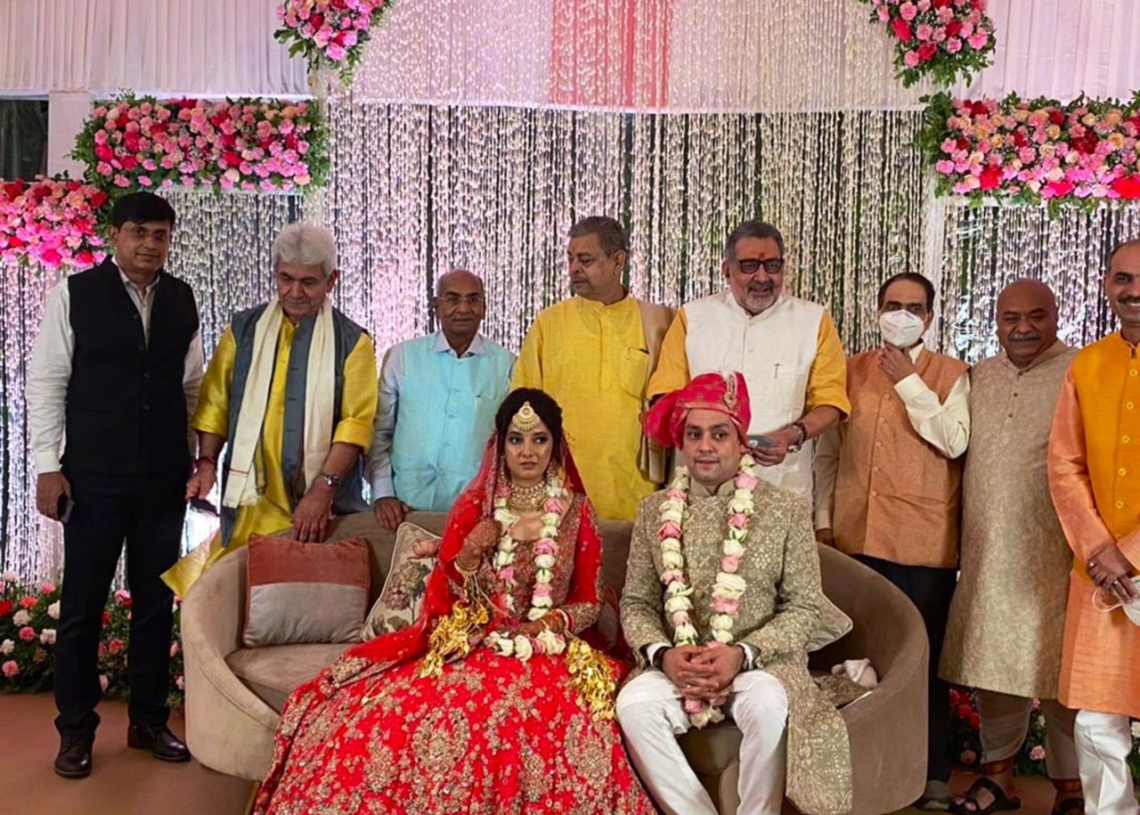 SRINAGAR: When Lieutenant Governor Manoj Sinha wearing a crisp yellow `kurta’ and `white gamcha’ was introducing the guests to Prime Minister Narendra Modi at the all-party meeting, little did people know that he had left his son’s marriage to attend the call of duty.

Sinha’s son Abhinav was getting married to Deepali on the same day when Prime Minister was to chair the all-party meeting in New Delhi. Like a soldier, he chose his duty and straight away drove to 7 Lok Kalyan Marg to attend the meeting. Not even once he gave the impression that he was preoccupied with his son’s marriage. He carried himself as if he was fully prepared to deliver.

Soon after the news broke, social media went crazy to hail Sinha for his commitment. “So it was the wedding day of LG of J&K Manoj Sinha Ji’s son & whole a day he was busy in PM’s meetings with J&K delegation. Imagine someone staying away from family/home on such a special day. Full respect to him for his diligence,” tweeted Ashutosh Dogra.

Jay wrote that it was the wedding day of Manoj Sinha’s son still he was busy meeting with the PM and the team during the day.

On Thursday, Prime Minister Narendra Modi chaired a high-level meeting with leaders of various political parties of Jammu and Kashmir.  Detailed discussions were held on strengthening democracy in Jammu and Kashmir.

Manoj Sinha had participated in the all-party meeting in his official capacity as the head of the union territory.

However, only a handful of people knew that Sinha had driven straight from his son’s wedding to attend the crucial meeting. It is being said that only after the completion of the meeting, Sinha left the Prime Minister’s residence to reach the wedding venue.

Senior BJP leaders and Union Ministers attended the wedding and posted the images of the event later in the day.

It is not the first time when Sinha exhibited a high standard of probity and commitment towards his duties. When he was appointed Lieutenant Governor in August last year, he refused to board a chopper from Srinagar Airport to Raj Bhawan and instead traveled by road sending the security staff into a tizzy.

Sinha did not check into Raj Bhawan after his arrival as his predecessor, Girish Chandra Murmu was yet to vacate his official residence.

Later he checked into the Chashma Shahi Guest House where he spent the night before he was sworn in as the new Lieutenant Governor. It is to be noted that despite being a former union minister, he lived in a rented flat at Hauz Khas.

Known as Vikas Pursh (pro-development man) in Delhi’s power corridors, Sinha was the Minister of State for Railways in the first Modi government. He was also in charge of the Telecom ministry under the Modi government.

Tags: Call of dutyWeddings
No Result
View All Result