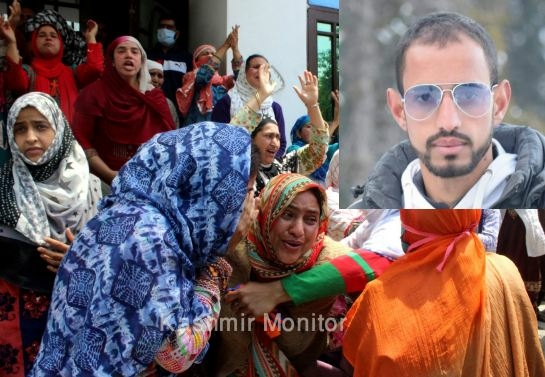 Family of the deceased youth who was shot dead by paramilitary forces in Budgam on Wednesday, May 13 2020 - Photo: KM/Umar Ganie

Srinagar: Police have lodged an FIR in the case involving killing of a civilian in Narbal area of Central Kashmir’s Budgam district.

Tariq Ganai, DC Budgam told a local news agency that police has registered an FIR into the killing and the investigation into the matter has been started.

Earlier in the day, a youth was killed after paramilitary CRPF forces fired at him near Kawoosa Khalisa village in Narbal area of Budgam.

Identified as Mehrajudin Shah, 25, son of Ghulam Mohammad Shah of Makhama Beerwah, the slain was shot at when he allegedly jumped a checkpoint.

He was soon shifted to SMHS hospital Srinagar in a critical condition. However, he was declared as brought dead by the doctors who attended him at the hospital.

“A civil vehicle fled from 2 nakas in Narbal kawoosa. Upon which CRPF party fired in which one person got injured. (He has been) shifted to hospital,” SSP Budgam Nagpure Amod was quoted saying by news agency GNS.

Today, at about 1020 hours a civil vehicle, Wagon R, registration no JK02AK 6702 broke a Check point of J&K police and sped and came across another Check point of CRPF, manned by troops of C/141 Bn CRPF and jumped this Check point as well.

A convoy of Army, at that point in time, was passing through the adjacent road and fearing a sabotage, the CRPF jawan of C/141, manning this Naka, fired warning shots.

This civil car was driving in the wrong direction of the road and that was even more alarming. When the car didn’t stop, despite warning shots, the jawan fired at the car and in turn, the driver was hit on his left shoulder.

Subsequently, he was shifted to SMHS hospital, Srinagar, where, he was declared as brought dead by the doctors

Former J&K CM Omar Abdullah among others have condemned the killing and called for an “impartial” probe.

“Very unfortunate” The circumstances surrounding this shooting need to be impartially investigated & findings made known. My condolences to the family of the deceased,” Omar tweeted.

Jammu and Kashmir People Conference too condemned the killing.

“We strongly condemn the killing of Mehraj din Shah, ostensibly shot at for jumping a check post. Jumping a checkpoint must not be a reason to kill and we must not normalize shooting of our youth for minor incidents like these This is an unjustified and unjustifiable act of violence & an irreparable loss for family of the deceased. Our thoughts and prayers are with his family. May Allah give them patience & courage to bear the loss in this hour of grief. We also urge the government to probe the matter dispassionately and hold those responsible to account,” PC spokesperson Adnan Mir said in a statement.

EPF, MSMEs, TDS boosters: Here are all the announcements FM made today