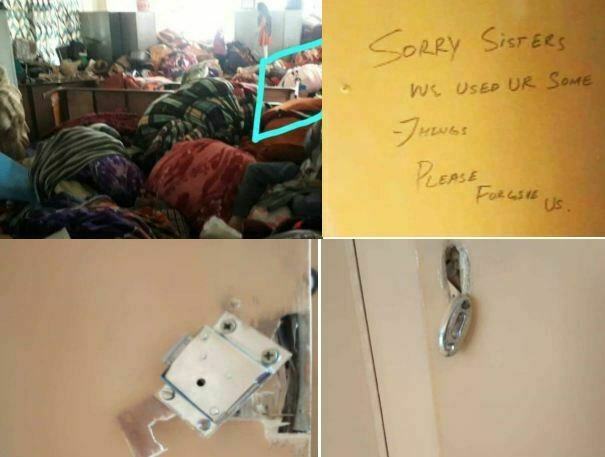 Photos showing broken locks, messed up belongings, and the message left by quarantined people at girls' hostel in IUST (Pictures shared by students)

Srinagar:  Female student boarders of Islamic University of Science and Technology (IUST) have alleged theft and mishandling of their belongings at varsity’s girls’ hostel, which was declared as an administrative quarantine for the travellers returning to Kashmir from different places.

After two months of lockdown, the girl students, who had vacated the hostel late March soon after Covid-19 outbreak, had returned to the hostel on Saturday to take their belongings home.

The students said that majority of the belongings were missing as wardrobes and cupboards were broken by those quarantined in the hostel building.

They shared some pictures of the hostel rooms with The Kashmir Monitor, which showed how the locks of their wardrobes and cupboards were broken.

One one of the lockers, someone quarantined had even written a message: “Sorry sisters, we used ur some things. Please forgive us (sic).”

“We couldn’t take our entire belongings to our homes in March when the university administration hurriedly ordered us to vacate the hostel. On Saturday, we were shocked to see the locks of wardrobes and cupboards of our rooms broken. Many girls cried after seeing their valuable documents and books missing,” one of the students said.

She said the rooms were unclean and some of their valuable documents including identity cards were dumped into dustbins.

“Almost every girl had locked certificates and other valuable documents in her locker. On Saturday some of the girls found their identification cards in dustbins. We are worried about our documents without which we can’t do anything in future,” the student said.

Another student said the university administration has adjusted their belongings haphazardly in two rooms, which made it difficult for almost 300 students to identify their respective belongings.

“Our footwear, clothes are missing. We fail to understand why the hostel was declared as a quarantine centre when the entire campus has many buildings to accommodate the suspected Covid-19 cases?” she said.

The students demanded the university administration to investigate the matter and help them get back their valuables.

Aneesa Jan, Dean of Students, IUST confirmed the incident and said the varsity had “no control over the hostel, which was declared as quarantine.”

“The administration had given us very less time to empty the hostel rooms. Still we took out the unlocked belongings of our students and stored them in two rooms. But some of the persons quarantined have broken locks of fixed wardrobes,” she said.

Aneesa added that they have asked the students to check and list their missing belongings with the university administration.