Brazil to Mumbai: Meet Kashmir’s ‘international’ papier mache teacher who is on a mission to restore pristine glory of the art 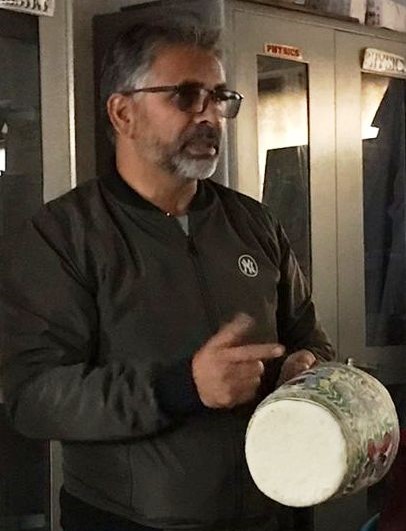 Srinagar: From Brazil to Malaysia  and from Mumbai to Lucknow, Kashmir-based artist Zaffar Wani has taught papier mache craft to umpteen students.

Come 2022,  he has started teaching papier mache techniques to school-going children to restore the traditional Persian craft to its former glory.

“I have taught this craft at several places in India and abroad like Pune, Mumbai, Lucknow, Brazil, Malaysia, etc. At some of these places, not just young people, but the elderly too come to learn this craft. Usually, these classes are held at exhibitions or other private functions and I am especially called to teach this craft to a select group of people interested in knowing about papier mache,” Wani told The Kashmir Monitor.

Despite having taught at several places across the world, Wani, who hails from the Zadibal area of the old city, said teaching school children in Kashmir was a satisfying experience.

“For the first time, I am teaching papier mache to school children in Srinagar and it has been a good experience. I also tell the children about the history of papier mache and how it came to Kashmir from Iran,” he said.

In collaboration with the Educational Revival through Arts and Aesthetics (EdRAAK), Wani has now started taking papier mache classes for the students of Saint Paul’s International Academy, Srinagar.

He said he was hopeful that other schools too would exhibit interest in organizing the craft classes.

“I started learning papier mache right from my childhood as my family was into this craft. Those days, people preferred to take to this craft instead of jobs as it would pay well. Unfortunately, artisans do not make much money these days. We are trying to engage other schools as well and if more institutions show interest, it will augur well for the revival of papier mache,” he said.

Meanwhile, EdRAAK founder Iliyas Rizvi said they had started this unique initiative to keep the children engaged in the winter.

“To facilitate creative education, EdRAAK has started a unique intervention in the city schools. Ahead of winter, Kashmiri children would always be seen as busy with exams and awaiting the results to start a new session. But, as the education dept has changed the exam calendar, we thought of utilizing the extended session with some creative intervention for schools. Our goal is to make students active through creativity as there are common observations of fatigue, disinterested faces, and less energy with defocused minds due to the prolonged session,” Rizvi told The Kashmir Monitor.

“Four months of extension is also showing the impact on their creativity. Creative exercises of art and craft and playing with colors is one of the best ways to regenerate school children. This is going to have a positive response on their overall academic grades. We are thankful to the Principal of the Saint Paul’s International Academy, Madam Grace Paljor for joining hands to work on such a project. We are hopeful other schools will follow at a time when children are under fatigue and stress. For them, it is motivational in addition to creative learning,” he added.