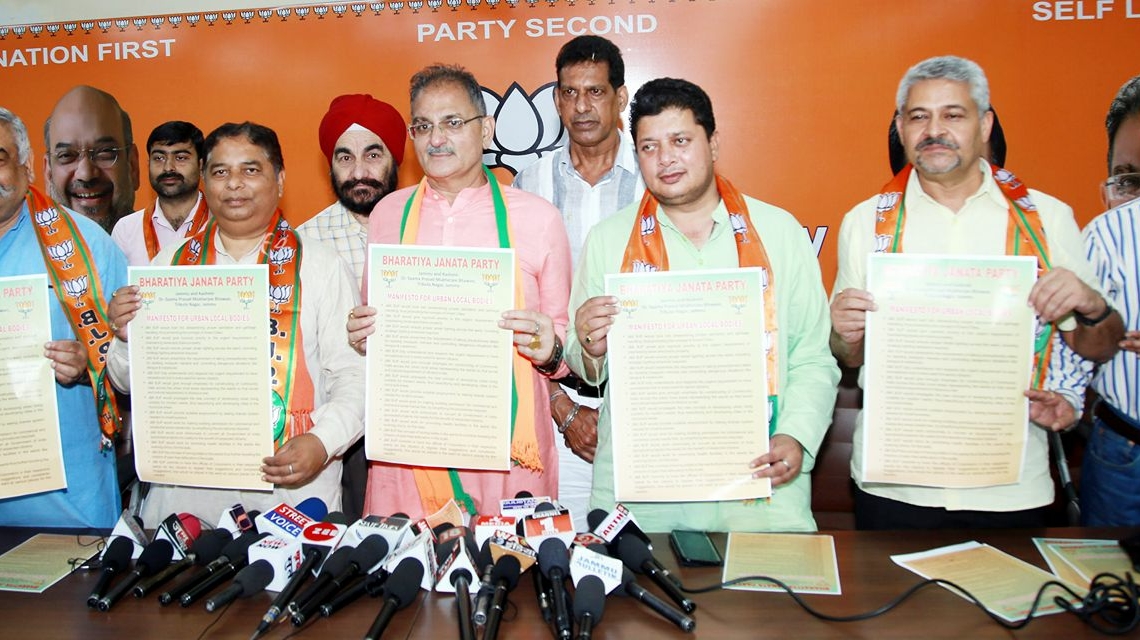 Jammu, Sep 30: The Jammu and Kashmir unit of the BJP on Sunday released its manifesto for the upcoming urban local bodies polls in the state, promising proper sanitation and garbage handling, and tackling mosquito menace among others.

It also promised recreational club in every ward for senior citizens, developing urban living suitable for modern needs and easing license system needed for small business and making building permission for commercial and residential areas hassle-free.
The four-phased urban local bodies polls are scheduled to start on October 8. Elections in 422 wards across Jammu and Kashmir would be held after a gap of over eight years.

Releasing the manifesto at BJP state headquarters here, former deputy chief minister Kavinder Gupta said there was massive response of people towards the party and it would register overwhelming victory in all the urban local bodies.

He said the party would give topmost priority to the urgent requirement of maintaining lanes and drains properly, ensure proper street lightening, including strategic lighting wherever required.

According to the manifesto, it would give enough emphasis for constructing of community halls across the urban local areas representing the wards so that social and cultural requirement of citizens is met, to propagate the new concept of developing urban living suitable for modern needs, thus beautifying and developing cities in the municipal areas.

It said the BJP would provide suitable employment by easing license system needed for small business, work for making building permission for commercial and residential areas hassle free by simplifying the procedures, work extensively to convert all centre-sponsored projects into “reality”.

The BJP would work for promoting health facilities in the wards like evening clinics and would work towards boosting Open Defecation Free (ODF) mission in the state, the manifesto read.
The party also expressed its commitment to set up the offices of corporators in their respective wards for the citizens to register their suggestions and complaints.