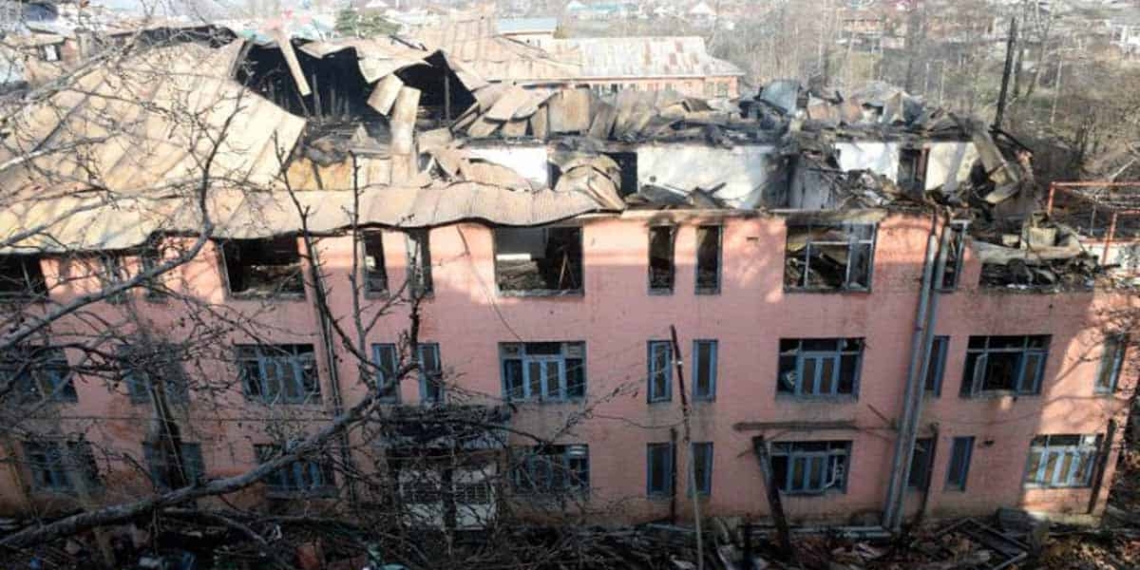 Srinagar: A day after the devastating fire incident, cleaning and sanitization works were in full swing at the Bone and Joint Hospital, Barzulla.

Officials are hopeful that the Valley’s iconic orthopaedic hospital will resume functioning after a week. Additional Chief Secretary Health and Medical Education Department, Vivek Bharadwaj said their first priority was the resumption of OPD services.

“All workers are working hard we know the hospital is very important for the people of Kashmir. Around 20 major surgeries take place here daily and we will make it operational in a week to 10 days. And before that, we want that OPD should start,” Bhardwaj told reporters.

Additional Chief Secretary of Health dismissed reports that the hospital had been fully damaged.

“There was a fire in the operation theatre on the upper floor. It was the emergency operation theatre, not the main operation theatre. Other wards are safe and we evacuated all patients and nobody received any injury. The fire brigade came at the proper time and we hope that very soon we will make it operational. You must have seen that the fire was extinguished on time otherwise damage would have been greater,” he told reporters during a visit to the hospital.

He also dismissed allegations that the fire safety audits of the hospitals had not been carried out.

“Fire safety audits of every hospital have been conducted and we have been taking necessary measures and accordingly implementing the suggestions,” he said.

Deputy Commissioner Srinagar Mohammad Aijaz Asad said investigations into the exact reason for the cause of fire at the hospital were underway. “Once the report is received, we will be in a better position to say what the reasons were for the fire,” he said.

The DC Srinagar too maintained that the hospital was not fully damaged and they were working towards restoring power and water supply.

“It is not right to say that the hospital was fully damaged. Only the upper floor emergency operation theatre has been damaged. A total of 113 patients were admitted and all were shifted to other hospitals. As the Additional Chief Secretary Health has already stated that it will take 7-10 days to make it functional again, we are working towards restoring power and water supply at the earliest so that the OPD can function,” he told reporters.

Meanwhile, the fire incident at the hospital turned locals as well as doctors emotional. UK based senior pulmonologist of Kashmiri origin Dr Tasaduk Sultan Khan said the Barzulla hospital was a ‘rarity’.

“A separate hospital for the orthopaedic speciality is a rarity and nothing short of luxury. Bone and Joint hospital has been an integral part of my childhood and a brief training encounter. Watching the videos of thick plumes of fire engulfing this historic hospital was nothing but pain and despair. The successful and timely evacuation of patients in the midst of this raging fire cannot be praised any further. Given the fact that our place doesn’t have a state of the art, fire evacuation and safety machinery, it was nothing short of a miracle that patients with fractured limbs hooked to beds were rescued in the nick of time,” he said.

The Department of Orthopaedics, Government Medical College Srinagar (Bone and Joint Surgery Hospital) is considered an important orthopaedic hospital in Northern India. It is the only orthopaedic trauma hospital that not only caters to Kashmir valley but Leh, Ladakh and Kishtwar, Poonch, Rajouri and Ramban districts of Jammu Division.

In the year 1970, the department separated from general surgery. The concept of a separate Hospital for Bone and Joint Surgery was conceived by Late Prof. Farooq Ashahi and it was through his efforts that this hospital was dedicated to the general public way back in 1982.