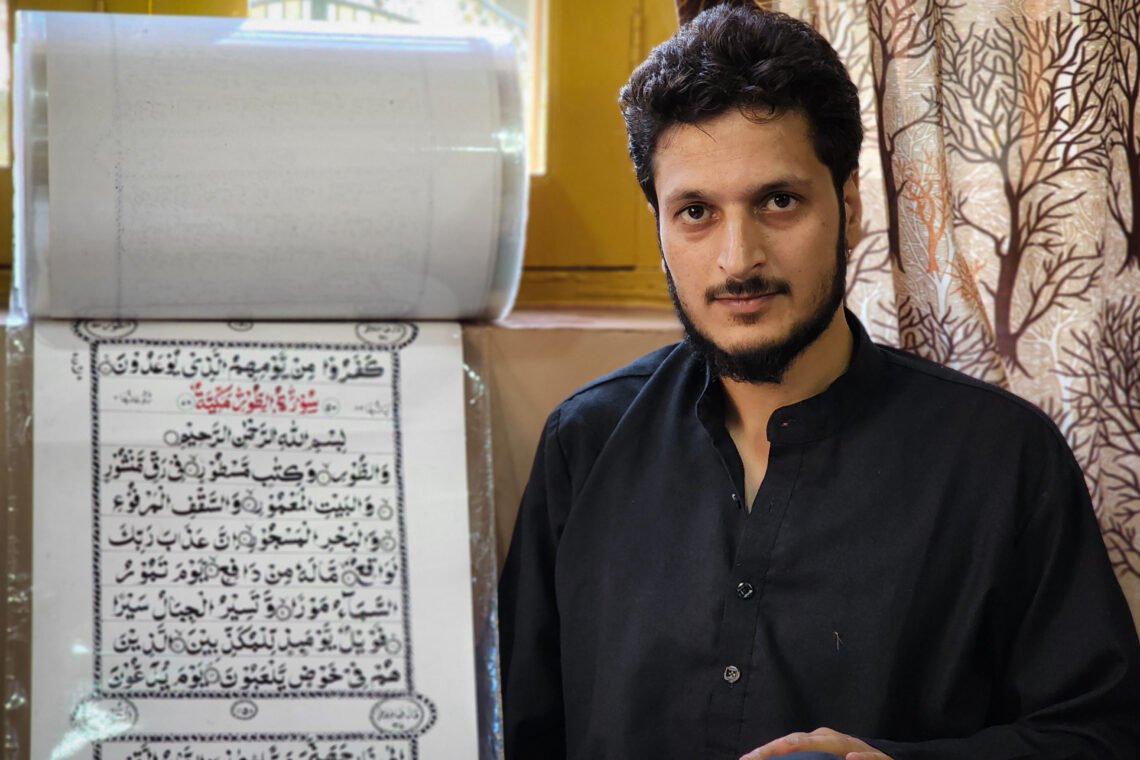 Srinagar: When Mustafa Ibni Jameel realized that he was weak in mathematics and would not be able to pursue higher studies, he decided to turn to calligraphy.

And now at 27, he has entered the record books for handwriting a manuscript of the Holy Quran on a 500-meter-long paper scroll.

Mustafa Ibni Jameel, who hails from Gurez in the Bandipora district, said it took him seven months to hand-write the manuscript.

“It took me seven months to complete it and I would spend 18 hours daily. In 2017, I hand-written the first manuscript of the Quran and so far I have handwritten three copies. One requires a lot of patience and determination to complete this and with the grace of Allah, I was able to enter the record book,” said Mustafa.

He said he had initially planned to handwrite the Quran on a 1500-meter-long paper scroll but could not do the same due to budgetary concerns.

“I have hand-written the Quran on a 500-meter scroll due to constrained budget as earlier I had planned to use a 1500-meter long scroll. This manuscript nevertheless cost me Rs 2.5 lakh and my close relatives helped me with this. This paper is not available here and I had to travel to Delhi. I managed to get this 500-meter scroll from a factory and got the manuscript laminated in Delhi only,” he said.

Mustafa said he was a self-taught calligrapher and wanted the youth to develop a ‘connection’ with the Quran.

“I haven’t studied a lot and I could not clear the 10th class exams as I was weak in mathematics. Therefore, I decided to turn to calligraphy. I am happy now but there is a lot more to do on a bigger level. My family is happy too and my handwriting this manuscript, I hope I inspire the youth to develop a connection with the Holy Quran,” he said.

Mustafa has now entered the Lincoln Book of Records. “This certificate is proudly presented to Mr. Mustafa Ibni Jameel, S/o Jameel AhmadLone (01-02-1995) set a new record by writing the Holy Quran on a 500-meter white scroll paper. Its length is 500 meters. This achievement is registered in the Lincoln book of records, dated 29/05/2022 This record attempt was held in New Delhi. (sic),” states the Lincoln Book of Records on its website.