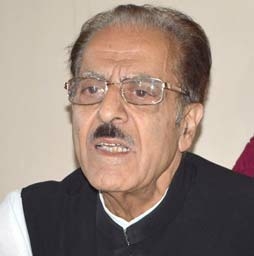 Srinagar, Sep 17: Former Union Minister and senior Congress leader, Prof. Saifuddin Soz on Monday said that Armed Forces Special Power Act (AFSPA) has caused death and destruction in the valley, claiming that the law was the main factor responsible for deepest alienation of Kashmiris, particularly, the youth.
“Through a mail today, I cautioned Nirmala Sitaraman, Defence Minister of India, that in view of the fact that the draconian law – the AFSPA has caused death and destruction and has been the main factor responsible for deepest alienation of Kashmiris, particularly, the youth, during its painfully long period of promulgation i.e. 28 years since 10th September, 1990, it must be revoked in larger public interest,” Soz said in a statement issued.
“I suggested that the immediate action that she could take was to hold a meeting with former Home Ministers and Defence Ministers of India on this issue,” he said, adding “I reminded her that the premier investigating agency of India, the CBI had itself gone to the Supreme Court of India on 19th March, 2012 against misuse of this law.”
“Since some officers have gone to the Supreme Court of India to defend their case on continuance of AFSPA, she had perhaps, rightly advised them that there were institutional mechanisms available to them. I asked her, if the institutional mechanisms were available to the Army, why not to the people of Kashmir?,” he said.
“Finally, I proposed to her that since she has started applying her mind on the efficacy of this Draconian Law, she should bring Kashmir’s mainstream leadership face to face with the Generals, so that she would be better informed on what has been happening in Kashmir!,” Soz added.