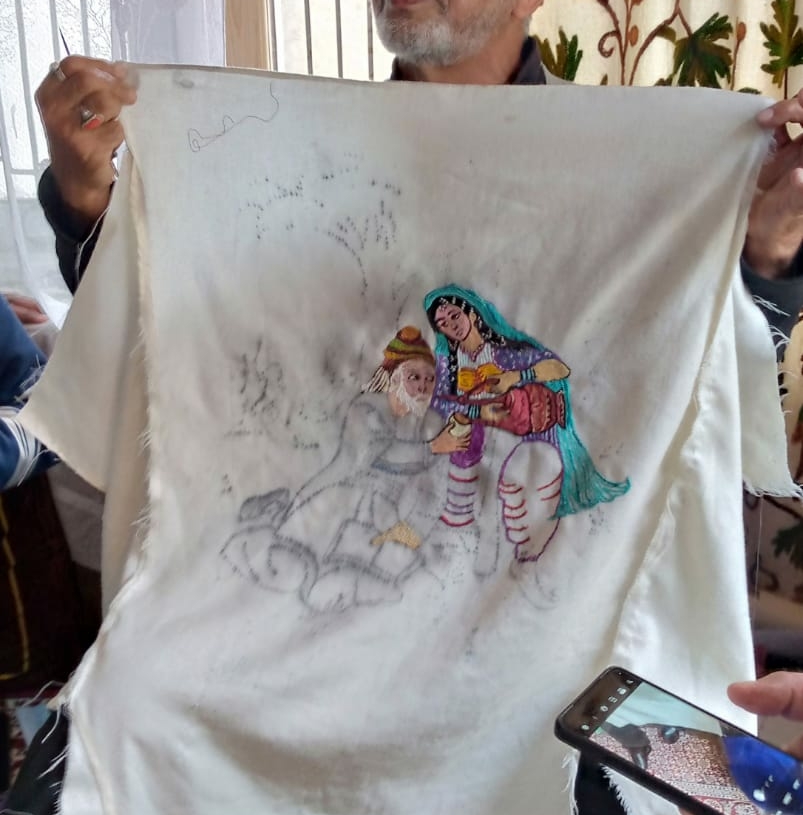 Srinagar: ‘Aari’ staple or hook-work is a common form of embroidery in Kashmir but master artisan Mir Abdul Majid took it to another level with his landscape embroidered pieces.

One of his landscape works of the Srinagar city’s Hari Parbat fort was even kept as a souvenir by former Prime Minister late Indira Gandhi and he went on to receive the state award in 2017 for his contribution to the art.

Hailing from the Kalai Andar area of the old city, Mir fondly recollects the time when the ‘aari’ staple was in big demand, especially among the foreigners.

“I have been doing aari work for decades now. There was a time when our coats, gowns, stoles, etc were mostly exported to foreign countries. There was a lot of demand for aari work but unfortunately, we have not done much work after the Covid lockdown,” Mir told The Kashmir Monitor.

He said he had received a lot of encouragement from Indira Gandhi in 1983.

“Aari work is an art and I have visited several Indian cities in connection with my work. I once gifted a piece that had embroidery work of the Hari Parbat Fort to Indira Gandhi in 1983 and I got a lot of encouragement,” said Mir, who also happens to be a poet.

Assistant Director Handicrafts and Handloom Department Dr. Shariq Iqbal said Mir was a master artisan who had made a mark for himself in landscape embroidery.

“Mir Abdul Majid’s landscape embroidered pieces are so immaculate and breathtaking that one of them was kept as a souvenir by the former Prime Minister late Indira Gandhi. His passion for this craft took him on journeys to display his work across India where he participated in exhibitions and trade fairs. He is a celebrated artisan, recognized for his intricate pieces. His work is showcased at the emporium where scarves, pherans, shawls, and suits with aari embroidery are put up for sale. He received the state award in 2017 for his contributions. As the Tulip Garden is about to open (on March 23), his work will be displayed at one of the stalls to showcase Kashmir handicrafts,” he told The Kashmir Monitor.

Incidentally, the workplace of Mir Abdul Majid located at Kathi Darwaza has been included in the ‘Srinagar Crafts Safari’ that has been started by the Handicrafts Department recently. The safari was started in the wake of Srinagar making it to the coveted list of the United Nations Educational, Scientific & Cultural Organisation (UNESCO) in Crafts and Folk Arts Category for the year 2021.

Director, Handicrafts and Handloom, Kashmir, Mahmood Ahmad Shah said they had started the Srinagar Craft Safari as part of efforts to give a boost to the handicrafts sector.

“We have started the Srinagar Craft Safari in different parts of old Srinagar city so that the people come to know about the rich handicraft products. Through the safari, people will also meet the artisans and see how different handicraft products are made,” Shah told The Kashmir Monitor.

This year, Srinagar’s application was forwarded to UNESCO on June 29 by the Government of India (GoI) and now this nomination is the global recognition to the rich craft legacy of Srinagar. Pertinently, the dossier for nomination for Srinagar as the creative city was first filed by Srinagar in 2019. However, only two cities – Hyderabad for Gastronomy and Mumbai for Film were chosen that year. Prior to 2019, only three Indian cities had been recognized as members of creative cities – Jaipur (Crafts and Folk Arts) in 2015, Varanasi (Creative city of Music) in 2015, and Chennai (Creative city of Music) in 2017.