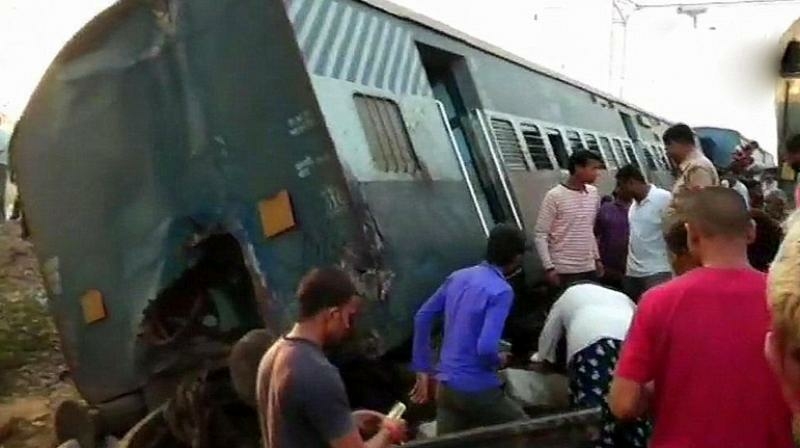 Raebareli: At least 7 people died and 27 others injured after nine coaches and the engine of New Farakka Express derailed in Uttar Pradesh’s Raebareli on Wednesday morning.
Six people died at the site of the accident while one person was declared dead when taken to the hospital.
“6 died at the site of incident and 27 injured taken to hospital. One declared dead at the hospital. There is no live victim trapped now,” Sanjeev Kumar, Team Commander NDRF said.
The accident took place 50m from Harchandpur railway station in Raebareli.
NDRF teams from Lucknow and Varanasi helped with the rescue.
“All passengers have been evacuated. Special train is being arranged to take them. It may take 24-36 hours for completion of clearance operation,” DRM Northern Railways said.
Drones and long-range cameras were being used to monitor the situation at the site of New Farakka Express Train derailment.
Prime Minister Narendra Modi expressed his condolences to the bereaved families.
“Anguished by the loss of lives due to a rail accident in #Raebareli. Condolences to the bereaved families and I pray that the injured recover quickly. UP Government, Railways and NDRF are ensuring all possible assistance at the site of the accident,” PM Modi tweeted.
Minister of Railways Piyush Goyal announced Rs 5 lakh ex-gratia for the next of the kin of the deceased, Rs 1 lakh compensation for those with serious injuries and Rs 50,000 for those with minor injuries.
The Uttar Pradesh CM has also announced Rs 2 Lakh ex-gratia to the next of the kin of the deceased and Rs 50,000 compensation for those with serious injuries.