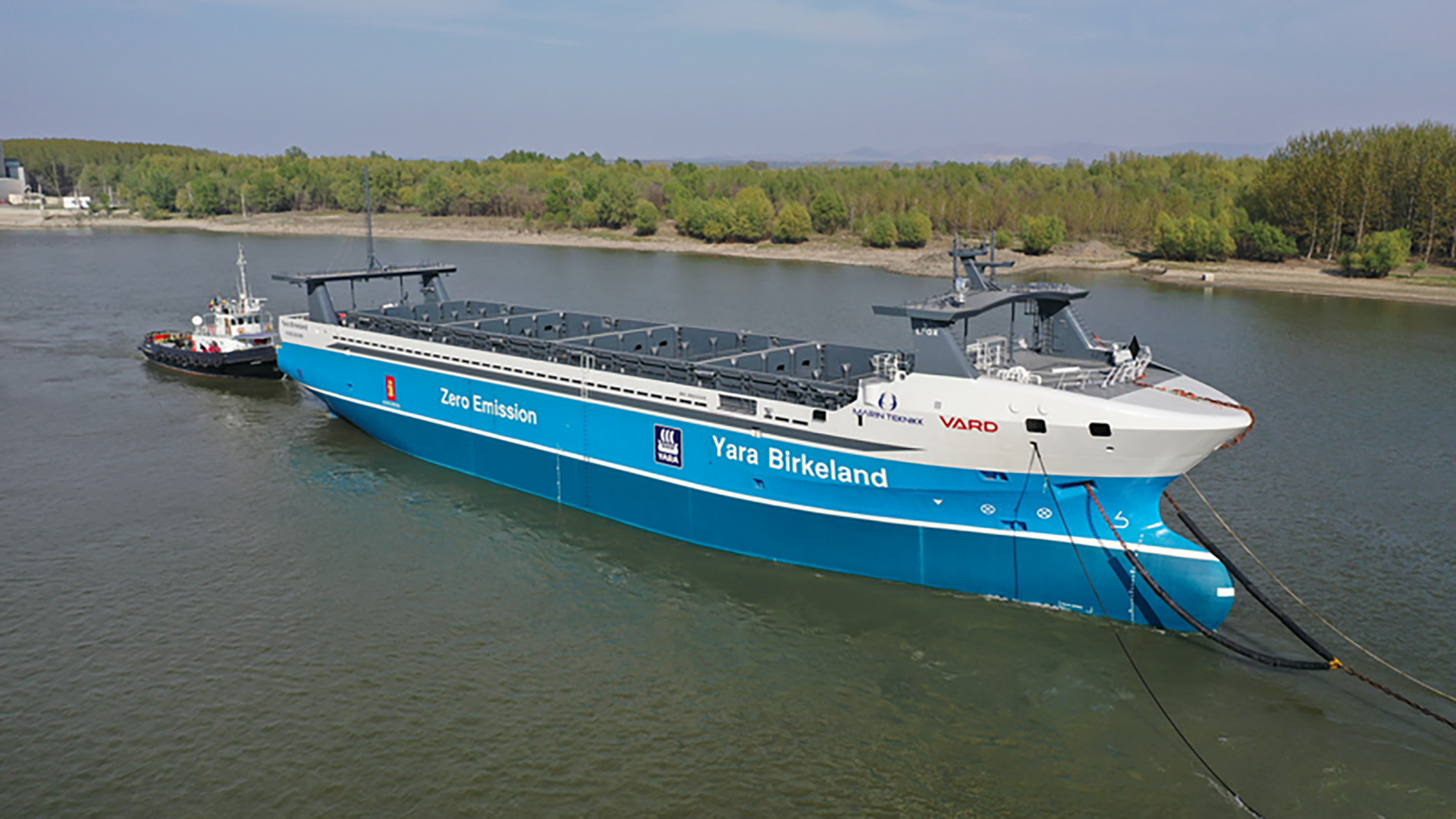 The wait is finally over. The world’s first fully-electric autonomous cargo vessel was unveiled in Norway.

Experts believe it is a small but promising step toward reducing the maritime industry’s climate footprint.

By shipping up to 120 containers of fertilizer from a plant in the southeastern town of Porsgrunn to the Brevik port a dozen kilometres (about eight miles) away, the much-delayed Yara Birkeland, shown off to the media on Friday, will eliminate the need for around 40,000 truck journeys a year that are now fuelled by polluting diesel.

“Of course, there have been difficulties and setbacks,” said Svein Tore Holsether, chief executive of Norwegian fertiliser giant Yara.

“But then it feels even more rewarding to stand here today in front of this ship and see that we were able to do it,” he said, with the sleek blue-and-white vessel moored behind him in an Oslo dock, where it had been sailed for the event.

The 80-metre, 3,200-deadweight tonne ship will soon begin two years of working trials during which it will be fine-tuned to learn to manoeuvre on its own.

The wheelhouse could disappear altogether in “three, four or five years”, said Holsether, once the vessel makes its 7.5-nautical-mile trips on its own with the aid of sensors.

“Quite a lot of the incidents happening on vessels are due to human error, because of fatigue for instance,” project manager Jostein Braaten said from the possibly doomed bridge.

“Autonomous operating can enable a safe journey,” he said.

While the distance the Yara Birkeland will cover may be short, it will face many obstacles.

It will have to navigate in a narrow fjord and sail under two bridges while managing currents and heavy traffic from merchant ships, pleasure craft and kayaks, before docking at one of Norway’s busiest ports.

The next few months will be a learning period.

“First of all, we have to detect that there’s something there. We have to understand that it’s a kayak, then we have to determine what to do with that,” said Braaten.

“Currently, large vessels don’t do much with a kayak. They can’t do much. They can warn, but they cannot manoeuvre away” or reverse to avoid an incident.

Autonomous navigation will require a new set of regulations that do not exist yet.

On board the Yara Birkeland, the traditional machine room has been replaced by eight battery compartments, giving the vessel a capacity of 6.8 MWh — sourced from renewable hydroelectricity.

The maritime sector, which is responsible for almost three percent of all man-made emissions, aims to reduce its emissions by 40 per cent by 2030 and 50 per cent by 2050.

Despite that, the sector has seen a rise in recent years.

International and domestic shipping and fishing combined, the industry emitted more than one billion tonnes of greenhouse gases in 2018, up from 962 million tons in 2012, according to the latest figures from the International Maritime Organization.

By itself, the Yara Birkeland’s contribution to global climate efforts will be just a drop in the ocean — eliminating 678 tonnes of carbon dioxide per year churned out by the redundant trucks.

And experts don’t expect electric vessels to become a universal solution for the industry any time soon.

“Electricity has a ‘niche’ use, in particular for ferries as these are often short and stable routes, possibly on coastal and river transports. But it’s not well-adapted for long ocean crossings,” said Camille Egloff, a maritime transport expert at Boston Consulting Group.

“Not only would (a vessel) need to be autonomous for long distances but you would also have to equip ports with battery chargers. So there are technical and infrastructure challenges that would need to be coordinated,” she said.

While dozens of electric ferries already criss-cross the fjords of Norway — a major oil and gas producer which is paradoxically also a leader in electric transport — ocean liners will have to rely on other technologies to go green, such as LNG, e-methanol and hydrogen.