‘You made this journey beautiful’: Virat Kohli’s heartfelt message to fans, teammates on reaching100 test milestone 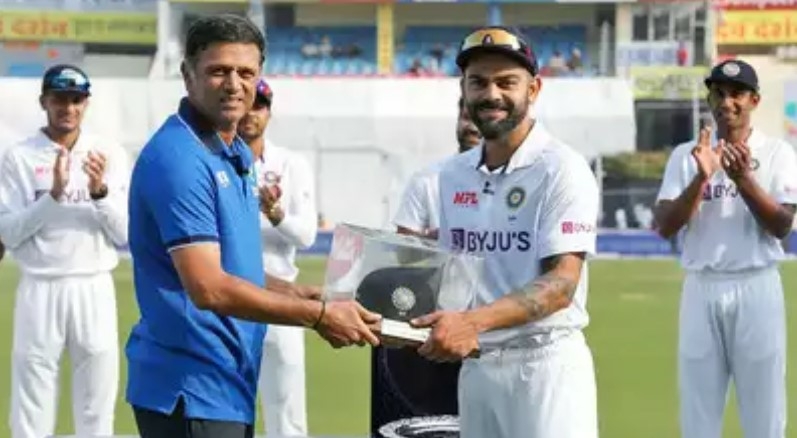 Mohali, March 6: Former India captain Virat Kohli thanked his family, teammates, coaches and the BCCI in a heartfelt message at the end of his 100th Test match that India won on the third day, beating Sri Lanka by an innings and 222 runs here on Sunday.

“Been a long journey to get here. Full of ups and downs and learnings. Would not have had it any other way. Thank you for all your support Flag of India, Raised hands,” Kohli started his message which was released on his social media handles.

The tweet included a video that captured moments from the Mohali Test, of his teammates and head coach Rahul Dravid congratulating him, celebrating the fall of a wicket and posing with his wife Anushka Sharma.

“Thank You. To all my family, teammates, coaches and BCCI. You have made this journey beautiful. Onwards and Upwards,” said a message in the video.

Team India celebrated his 100th Test with a massive win.

Ravindra Jadeja starred with bat and ball as India took a 1-0 lead in the two-match Test series after defeating Sri Lanka by an innings and 222 runs at the IS Bindra PCA Stadium. After being bundled out for 174 in the first innings, Sri Lanka were made to follow-on and were all out for 178 in 60 overs to complete a meek surrender by the visitors in just three days.

Jadeja, after making 175 not out with the bat that helped India declare their innings at 574/8, took 5/41 in the first innings and 4/46 in the second innings. He and Ravichandran Ashwin, who took 2/49 and 4/47 apart from making 61 with the bat, made merry on a day where 16 Sri Lanka wickets fell.