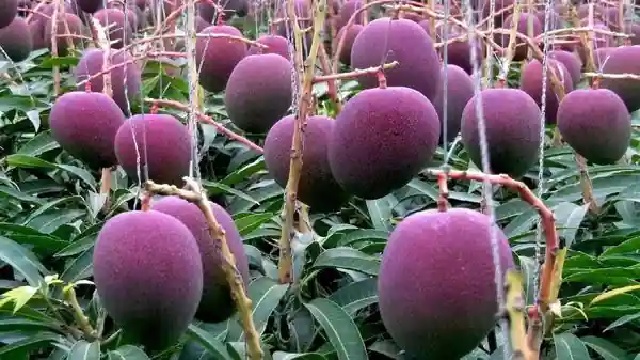 Four security guards and six dogs have been guarding the `world’s most expensive mangoes’ round the clock in Madhya Pradesh.

Rani and Sankalp Parihar,  a couple in Madhya Pradesh hired security guards and dogs to protect the prized possession.

Japanese Miyazaki, according to reports. are the world’s most expensive mangoes. It is also known as the egg of the sun. It sells at Rs 2.70 lakh per kg in the international market.

The couple planted two mango saplings years ago. They thought that they will grow like any other ordinary mango tree. However, they bore unusual ruby-colored mangoes.

Last year, the mangoes were stolen after locals came to know that the couple has started to grow this rare fruit.

After the incident, Rani and Sankalp hired guards to protect their cultivation. This year, however, they have employed four guards and six dogs to protect the rare trees.

Sankalp said that he got the saplings from a man on a train during his journey to Chennai.

“He offered these saplings to me and asked to take care of these plants like our babies. We planted it in the orchard without knowing what variety of mangoes it will produce,” said the orchardist.

Sankalp has named the mangoes Damini, after the name of his mother. Later, he researched more about this variety and found the real name. “But it is still Damini for me,” the man stated.

Rani said that several mango cultivators and fruit lovers have contacted them. She further stated that a jeweler from Mumbai was ready to pay ₹21,000 for a mango.

However, the couple has now made it clear they are not going to sell the fruit to anyone.