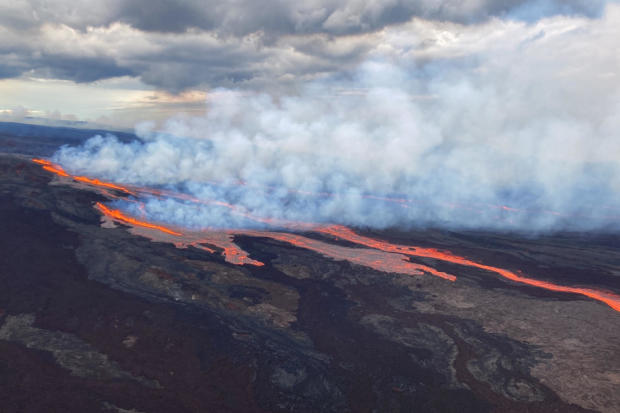 In this aerial photo released by the U.S. Geological Survey, the Mauna Loa volcano is seen erupting from vents on the Northeast Rift Zone on the Big Island of Hawaii, Monday, Nov. 28, 2022. Hawaii's Mauna Loa, the world's largest active volcano, began spewing ash and debris from its summit, prompting civil defense officials to warn residents on Monday to prepare in case the eruption causes lava to flow toward communities. (U.S. Geological Survey via AP)

Honolulu: The world’s largest active volcano, the Mauna Loa in Hawaii, has erupted for the first time in nearly 40 years, authorities said.

The eruption began at Moku’aweoweo, the volcano’s summit caldera, at 11.30 p.m. on Sunday, the first since 1984, Xinhua news agency quoted the US National Park Service as saying in an update on Monday.

The volcano’s alert level has also been upgraded from an “advisory” to a “warning” — the highest classification.

There is currently no indication of any migration of the eruption into a rift zone, according to the Hawaiian Volcano Observatory.

Lava flows in the summit region are visible from Kona, it added.

At this time, lava flows are contained within the summit area and are not threatening downslope communities, according to the Observatory.

Residents at risk from Mauna Loa lava flows should review preparedness and refer to Hawaii County Civil Defence information for further guidance, said the US Geological Survey (USGS) on Monday.

“Based on past events, the early stages of a Mauna Loa eruption can be very dynamic and the location and advance of lava flows can change rapidly,” the agency warned.

If the eruption migrates beyond the walls of the summit caldera, lava flows could “move rapidly downslope”, it added.

A series of recent warnings said that an eruption was possible after a spate of earthquakes in the region, including more than a dozen reported tremors on Sunday.

Mauna Loa, located inside Hawaii Volcanoes National Park, covers half of the US state’s Big Island, the BBC reported.

According to the USGS, Mauna Loa has erupted 33 times since 1843.

The previous eruption in 1984 sent lava flows within 5 miles of Hilo, the island’s most populous town.

Mauna Loa is the world’s largest active volcano. There are other larger volcanoes but these are classified as dormant, meaning they have not erupted for a long time, or extinct, meaning they are almost certain not to erupt in the future.

The volcano shares the Big Island with Mauna Kea, which is the tallest mountain in the world when measured from its underwater base nearly 20,000ft below the ocean surface.