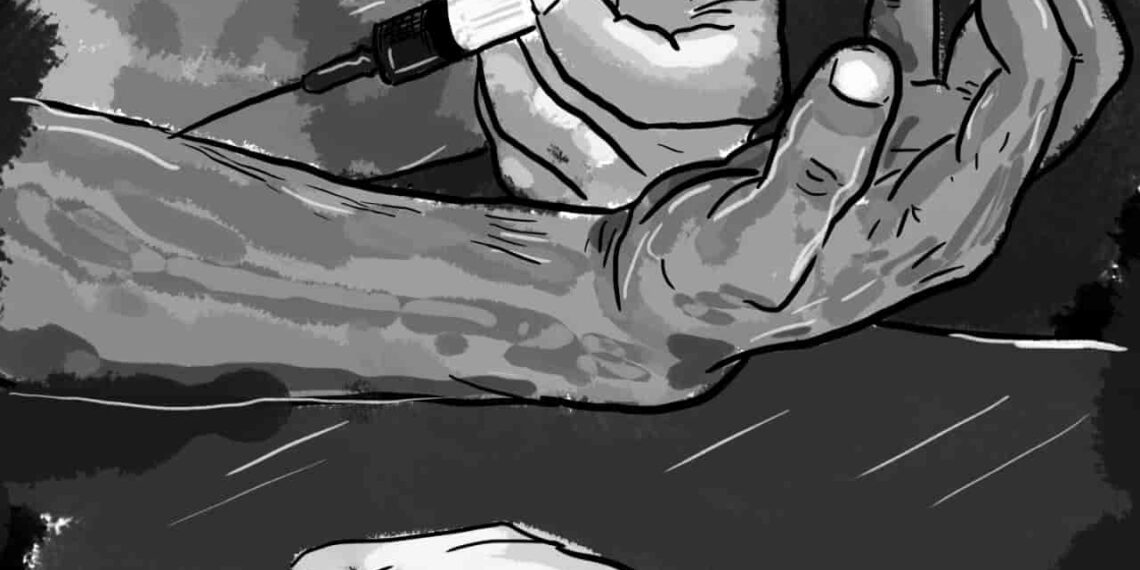 Srinagar: Umar (name changed), a student got hooked to heroin after a friend got it for him a year ago.

“At first, he smoked it but switched to needles when he found the high was better when injected. Six months ago, he discovered that he was HIV positive and vowed to give up his addiction,” the doctor treating him at the Drug De-Addiction Center, SMHS, Hospital said.

The high use of heroin is putting drug abusers at risk of getting or transmitting HIV/ AIDS (Human Immunodeficiency Virus) in Kashmir. HIV is a virus that is transmitted in bodily fluids. It damages the immune system and interferes with the body’s ability to fight infection and disease.

According to the clinical observations, the percentage of HIV in substance abusers in the valley is still low when compared to the rest of India yet the threat is pretty much evident.

Senior Resident at the Department of Psychiatry at SMHS Hospital, DDC Srinagar, Dr. Fazal-e-Roub told The Kashmir Monitor that although HIV/AIDS can affect anyone, the risk of infection is significantly higher in patients suffering from substance abuse, whether the risk is of direct exposure through needles or increased likelihood of high-risk behavior due to loss of judgment.

“This is because the needles, syringes, or other injection equipment may have blood in them, and blood can carry HIV,” he said.

Similarly, substance use disorder, according to the doctor,r can also increase the risk of getting HIV through sex. “When people are under the influence of substances, they are more likely to engage in risky sexual behaviors without protection (like a condom or medicine to prevent or treat HIV), having sex with multiple partners, etc,” he said.

Dr. Fazal said the patients with a history of heroin use at DDC are put on Opioid substitution therapy (OST).

“It is a type of harm reduction initiative that offers people who are dependent on opioids (such as heroin) an alternative, prescribed medicine. Besides, the patients are also counseled about the risks of shared needles, how it can put their spouses at risk of getting HIV, and the need to undergo screening in them,” he said.

According to the statistics J&K State AIDS Control Society (JKSACS) accessed by a total of 5500 HIV-positive patients, have been registered with the society in Jammu and Kashmir from 1991 to 2021.

An official at JKSACS said that many hidden cases go unreported as people show reluctance to come forward fearing the societal backlash and stigma attached to the disease.

The official said that awareness plays an important role in the prevention of the virus. “People should come forward for the tests and with the early detection of the virus, a patient can be prescribed proper treatment. Consequently, he lives longer,” he said.