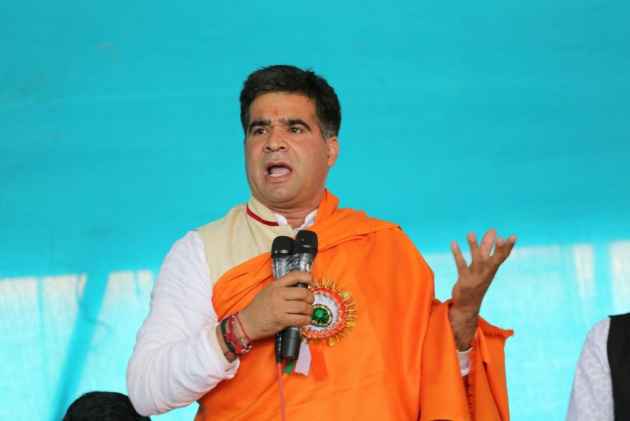 In a scathing attack on the Congress over its senior leader Digvijay Singh’s remarks on Article 370, Jammu and Kashmir BJP president Ravinder Raina said on Saturday that his party will not allow the Congress leaders’ “conspiracy” against India to succeed even if they take “100 rebirths”.

Raina accused the opposition party of being hand-in-glove with Pakistan, separatists and terrorists, and said the nation would never forgive it for “conspiring and back-stabbing Bharat Mata ”.

“The script was originally written by Gandhis and directed from Pakistan,” he said on remarks by Singh in a clubhouse conversation that the revocation of Article 370 and stripping Jammu and Kashmir of statehood was an “extremely sad” decision and his party will have a “relook” at the issue.

He said the people of Jammu and Kashmir are happy over the revocation of Article 370 as it was the main reason for Pakistani ideology to take roots and strengthen separatism.
It gave birth to terrorism which has bled the region, Raina said.

“The Article was responsible for the grave injustice with various communities including Gujjars and Bakerwals, Pahari speaking people, women and West Pakistani refugees,” the BJP leader said.

He said its revocation on August 5, 2019 fulfilled the dream of ‘Ek Nishan, Ek Vidhan and Ek Pradhan’ and alleged that the Congress is feeling the pain and is, therefore, “conspiring” which is evident from the statement of its senior leader.

“Let them take 100 rebirths, their conspiracies against the nation will not succeed. We have Prime Minister Narendra Modi, Home Minister Amit Shah, and every BJP worker is like a soldier, ready to sacrifice his life for the nation and the tricolour. We will not allow Sonia Gandhi, Rahul and Singh to implement Pakistani agenda in J&K,” Raina said.
He said the Congress leaders are enjoying facilities in India and even fighting elections but their hearts “beat for Pakistan”.
“The whole nation is watching the Congress and its leadership and will never forgive the party for being puppets in the hands of Pakistan,” he said.
Meanwhile, right-wing outfit Vishwa Hindu Parishad (VHP) also reacted sharply to the purported remarks of the Congress leader and requested the Centre and the J&K government to keep an eye on “elements who, on the behest of their separatist friends and in order to gain some limelight, issue such sadistic statements hurting the sentiments of nationalist citizens.”
“This pro-Pakistan agenda of terrorists can never be fulfilled as Congress or Digvijaya-minded people are never going to regain political power in India,” J&K VHP president Leelakaran Sharma said in a statement.