Will speak to youth of Kashmir, not Pakistan: Amit Shah 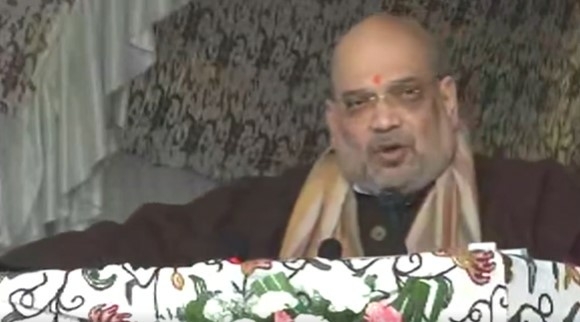 Srinagar: Union Home Minister Amit Shah lashed out at the National Conference president Dr Farooq Abdullah for advocating dialogue with Pakistan, stating that if he would talk, “it would be people of J&K and its youth only, no one else.

”“Dr Farooq sahib has suggested that I should talk to Pakistan. Let me clarify, if I will talk, I will talk to people of Jammu and Kashmir and its youth only, no one else,” Shah thundered from the pulpit while addressing a public gathering at SKICC on the banks of famous Dal Lake.

“Today, I am speaking my heart-out. I was posed a series of questions. Today, I am speaking without a bullet-proof shield,” Wearing a Kashmiri traditional pheran, Shah, who is on a three-day visit to J&K, said he has come to visit Kashmir for the first-time post abrogation of Article 370 on August 5, 2019.

“I am often asked by some people why curfew was imposed in Kashmir and why the internet was snapped. Let me answer today. This was done to protect and save the lives of our youth. We didn’t want vested interests and anti-peace elements to exploit the situation and push our youth on roads to face bullets,” Shah said.

“This step was taken to save the lives of Kashmiri youth.”

“It is time to come out of this bloodshed now and march towards a new journey of pace, development and prosperity. I promise, J&K will get what it deserves by 2024,” the Home Minister said.Lashing out at the NC and PDP, Shah said that the leaders of these two parties never condemned those who killed civilians. “Time has gone when militants would exploit the situation. No one will be allowed to kill civilians and we assure you that peace will remain intact in J&K,” he said.

Shah said there was a rumour mongering in J&K post Article 370 roll back that land and jobs of people would be snatched. “Give me one example, of any village, where land of any villager has been snatched,” he said. “Under the leadership of J&K LG Manoj Sinha, 20,000 jobs have been provided and 6000 more are in offing.

”He, however, said that unlike previous regimes, especially two-families that ruled for 70 years, jobs will be given to those only who deserve it. “Time is over now when people of J&K would have to pay money for jobs. Nepotism and Corruption is over,” he said. Taking a jibe at NC and PDP, Shah said those questioning him should answer as to why youth were deprived of becoming Sarpanchs and Panchs.

“There was a chief minister who would leave people suffering and spend six months in London every year. Now we have young sarpanchs, panchs and other representatives, who can become MPs, MLAs and also the Chief Minister,” he said, adding that” J & K will have a CM who will stay with people in districts.

”He said that under the leadership of PM Narendera Modi, Medical Colleges, AIMS, IITS and other institutions were given to J&K. “We have 30,000 Panchayat representatives in J&K. There is hardly any house where there isn’t a cooking gas connection. Tap water is available to everyone. Electricity is available to every poor family and health cover of Rs 5 lakh is available for one and all across Kashmir,” he said, and asked Dr Farooq and PDP chief Mehbooba why they couldn’t do it in 70 years.

He said that militancy is on a decline in J&K and efforts to replace guns with pens have borne the fruit. “These parties would demand to talk to Pakistan and Hurriyat. This way, they choked Kashmir’s economy only to enjoy power. Today, we have succeeded in replacing guns with pens even in militancy hot bed of Pulwama district besides other districts of Kashmir,” Shah said—(KNO)