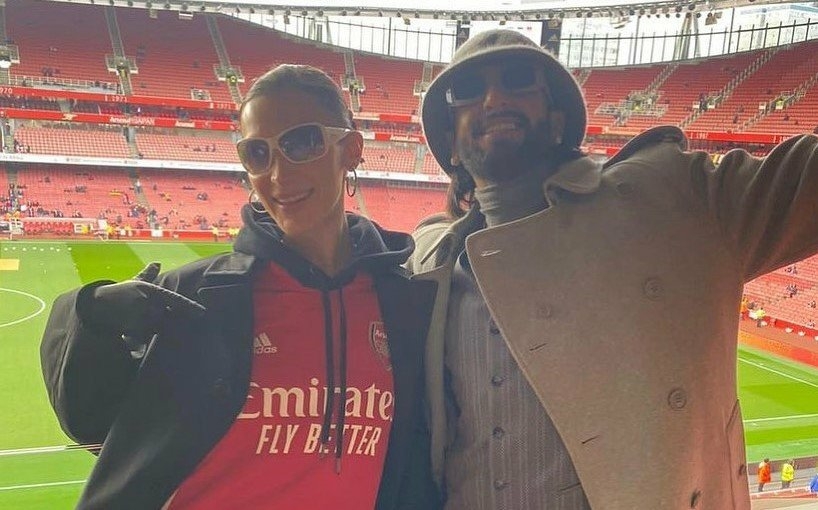 Bollywood actor Ranveer Singh and Palestinian-American supermodel Bella Hadid were spotted together at the Premier League Football in London.

YouTuber Chunkz shared a picture of the duo with him. Bella was seen flashing a victory sign standing alongside Ranveer.

Later, Ranveer also shared a picture with her “beautiful friend” Bella on his Instagram, where they follow each other now!

Calling Bella his “beautiful friend”, he said: “[It was] great to see the Gunners firing at the magnificent Emirates Stadium along with my beautiful friend, cheering loud and proud, repping the red & white, the very gracious Bella Hadid.”

Last month, Bella waded into the Hijab debate and called out the world for Islamophobia and discrimination against women wearing headscarves.

“In other forms of discrimination: I urge the world that is discriminatory against Muslim women to rethink what decisions you have made or are trying to make in the future about a body that is not yours,” the model wrote on Instagram.

“To get an internship, most universities will say the only way to get one is to take off the Hijab. It’s ridiculous and shows how Islamophobic the world is without even acknowledging it. In regards to these new bills that are either in the process of being passed or have already,” she added.

Earlier this month, Ranveer also rubbed shoulders with American actor Megan Fox and her fiance and musician Machine Gun Kelly. “Sometimes it feels like Ranveer lives in some alternate universe. First MGK and Megan Fox, then Bella Hadid, and that too at the Arsenal game. Strange crossover. [I] hope Ranveer enjoyed the 3 points as much as I did,” a fan said.