What is normal? A medical student explains! 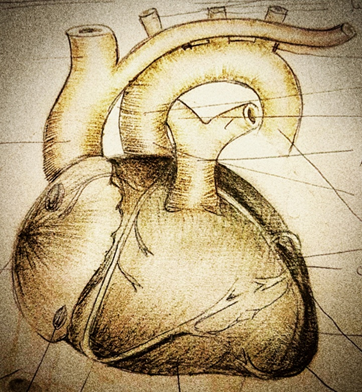 Sketch of an athlete’s hypertrophied heart by the writer

Chris Froome, a professional cyclist and four time winner of the Tour De France championship, has a resting heart rate of around 29 beats per minute. The same holds true for nearly all of his fellow participants, give or take a few beats, as they gird their loins before cycling through twenty gruelling stages for a combined total of 3,000 kilometres in over 100 hours of unimaginably strenuous physical activity.

Now, if you were to report this cardiological parameter to a group of doctors without telling them that it came from professional athletes, all of them would correctly diagnose it as ‘bradycardia’ i.e. a  heart rate that falls below the widely accepted convention in adults which lies between 60 to 100 beats per minute.

What is even more surprising is that, just as soon as these cyclists begin this coveted race, the frequency at which their heart pumps out blood can sky rocket to well above 160 beats per minute! Such an elevated heart rate is, in fact, a common feature of many ‘tachyarrhythmias’ that are potentially life-threatening and require urgent hospitalization followed by prompt medical care. However, for these cyclists, this is a normal physiological response that aims at meeting the bodily demands by ensuring a constant replenishment of skeletal muscle blood supply. Furthermore, making a side by side comparison of their chest radiographs with that of a regular person’s film unmistakably shows ‘cardiomegaly’ – a fancy term that means cardiac enlargement in proportion to the thoracic cavity – which is a manifestation of increased ventricular wall thickness, in their case.

As such, the biometrical data obtained from these top notch athletes, that clearly represents a significant deviation from what is considered normal for the vast majority of the adult human population, may well give rise to a question of whether it actually points towards an underlying pathology ? Does it indicate that any observation lying outside of the normal range – either above or below – is pathological?

The answer is in the negative.

These cyclists are, by far, among the most physically fit humans on the planet, with an ability to take on enormously more cardiovascular strain than the average person. Their heart rate is ‘abnormal’ in terms of what is acceptable for the general population but is totally ‘normal’ for their epidemiological sub- group and is not indicative of an underlying pathological process.

Populations across the world abound in examples of such compensatory transformations in human physiology and genetics, such as the South-Asian Bajau people known as ‘sea nomads’ for their predominantly aquatic lifestyle and unmatched diving endurance owing to their enlarged spleens – about 50% greater than unrelated, non-diving populations. Such an anomalous finding on a medical check-up, in the absence of background information about this community, would rightfully entail a slew of investigations by any worried, sane-thinking physician.

So, here comes the million dollar question: what do we mean by ‘normal’?

Normal in medical science is essentially a biostatistical term. Many quantifiable measurements in populations such as heart rate, blood pressure, BMI, serum electrolytes, arterial blood gas values, etc. are obtained by plotting and analyzing bell-shaped ‘Gaussian’ or normal distribution curves. In order to classify quantitative results as normal or abnormal, it is necessary for a cut-off point to be defined. By convention, the normal range is defined as those values that encompass roughly 95% of the human population, or 2 SD (standard Deviation) above and below the mean. This also means that 2.5% of the population will have values above, and 2.5% will have values below the normal range.

Normal does not mean “acceptable” or even “healthy”. Take another example from within the medical community itself – night shift workers. For this group, it is ‘normal’ to work long, tireless shifts at the hospital right up till the next morning, the exact nature and degree of participation in which varies from job to job and field to field. What is also often involved is the act of guzzling down cup after cup of coffee to stay alert and productive. To consider the health consequences of such a lifestyle is far from unnecessary or irrelevant. From an evolutionary perspective, it is believed that primitive humans slept when the sun set below the horizon and woke up when it rose back up into the sky, a practice that continues even today in many communities across the world. Although much remains to be discovered and understood as far as the phenomenon of sleep is concerned, current scientific research points out the role of melatonin, a hormone released by the pineal gland which regulates sleep activity in response to light. Disturbances in normal circadian rhythms of this hormone, say, for example, by sleeping during the day and working at night, can affect a person’s homeostasis and be potentially harmful in the long run. Nonetheless, this practice of working ‘nights’ is to be considered normal, even if it is demonstrably unhealthy.

This begs another question; just because a finding is considered normal based on a statistical analysis of graphically plotted variables, does that also mean it is to be considered okay from a medical perspective? In simple words, when is it correct to pathologize something?

Humans are undoubtedly a heterogeneous group and, notwithstanding the many rectifications of past errors that have been made over the last century thanks to painstaking scientific research, it is a shame that, historically, doctors have exhibited a rotten, though arguably well intentioned habit of pathologizing everything under the sun – be it variations in human lifestyles, ignoring racial distinctions in health parameters, gender and sexual identities or psychological and behavioural differences between human populations. Medical science in the hands of overzealous practitioners has often shown a bad inclination towards fixing things that are not necessarily broken.

In modern times, banking on the human desire to look and feel ever-so-youthful to meet the increasingly unrealistic societal standards of beauty, the medical industry has begun a campaign that pathologizes even the natural process of ageing that claims to restore or reverse all that time ‘mercilessly’ steals from people.

The widely acclaimed medical textbook, Davidson’s Principles and Practice of Internal Medicine, has a entire chapter titled ‘Ageing and Disease’, an excerpt from which states that, “The fraction of older people who age without disease ultimately declines to very low levels, however, so that use of the term ‘normal’ becomes debatable. There is a marked increase in inter-individual variation in function with ageing; many physiological processes deteriorate substantially when measured across populations but some individuals show little or no change. This heterogeneity is a hallmark of ageing, meaning that each person must be assessed individually and that the same management cannot be applied unthinkingly to all people of a certain age.”

Life, as we know it, is not something that can be preserved forever and all of us will ultimately die. Moreover, the natural resources on this planet are limited and cannot be sustained ad infinitum. As such, there is no Caladrius sitting at the bed of a dying patient that can halt the aging process effectively and grant him or her immortality. Ageing is normal – for now.

There are quite a few other things, however, that are largely a matter of choice and lie outside the domain of both scientific research and frankly, scientific interest – for people to categorize them as either normal or abnormal. Take, as an example, the clothing style and fashion sense in a particular region. Some people might consider a person wearing ripped jeans or a tank top as ‘abnormally’ dressed while at the hospital or a sacred place, but the same person would certainly fit in considerably well at an avant garde protest in the French capital. The categorization of such things is more of a societal verdict, rather than a scientific one – irrespective of whether it is right or wrong. How people choose to react to things, how opinions and values evolve and how society transforms itself over time is a complex interplay between human biology and environment, and is not a slave to scientific opinion, but it is undoubtedly science that has played a major role in steering the wheel and guiding people towards expanding their views to consider new outlooks and beliefs which are, most often than not, accepted by the vast majority of people who are exposed to them.

It is of utmost importance that we revisit why and how we come to regard anything as ‘normal’ or not. Rationality, objectivity, and bipartisanship should guide our decisions, lest we fall into the same trap of conventionalism as so many of our predecessors.

Gupkar 2.0: Split wide open in NC; Rana asks those 'talking against country' to go to Pakistan