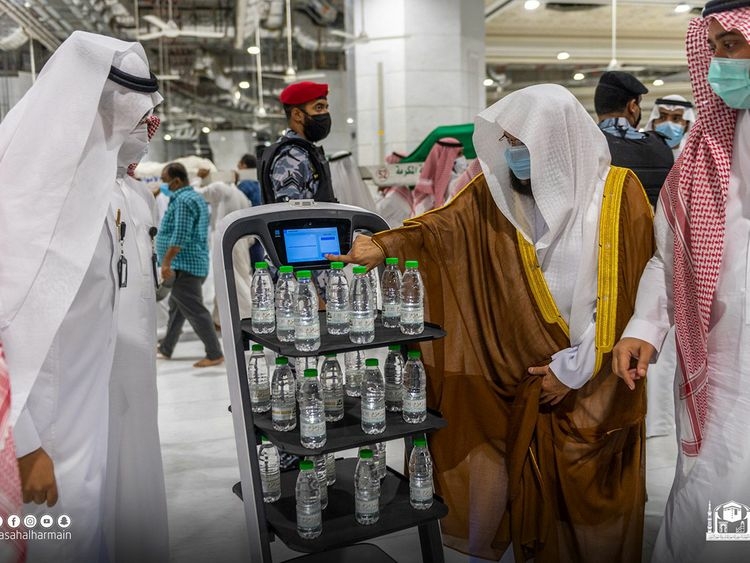 Head of the General Presidency for Affairs of the two Holy Mosques in Makkah and Madina, Abdul Rahman Al Sudais, has launched a smart robot to distribute the holy Zamzam water inside both holy places to prevent contact as part of sophisticated efforts to limit the spread of COVID-19.

“Modern technology is increasingly utilised to serve mankind especially amid the coronavirus pandemic, which helps, Allah willing, protect worshippers in the two Holy Mosques,” Al Sudais said on the occasion, a video of which was shared on Twitter.

He hailed the scientific advances, pointing out that the robot undertakes distribution of Zamzam bottles without coming into contact and without hampering the worshippers’ movements in the two mosques.

According to a Gulf News report, last week, 10 smart robots were introduced to support sterilisation efforts in the Grand Mosque.

The robots operate according to an automatic control system and at six levels, ensuring a safe healthy and environmental atmosphere and smart analysis of sterilisation requirements.

The battery-charged robots can operate for five to eight hours each without human intervention.

The internationally certified robots are part of the automatic sterilisation system in effect at the Grand Mosque to protect Umrah pilgrims and worshippers from the novel coronavirus.

In October, Saudi Arabia embarked on a plan for gradual resumption of the Umrah after suspension of around seven months amid strict precautions against COVID-19.