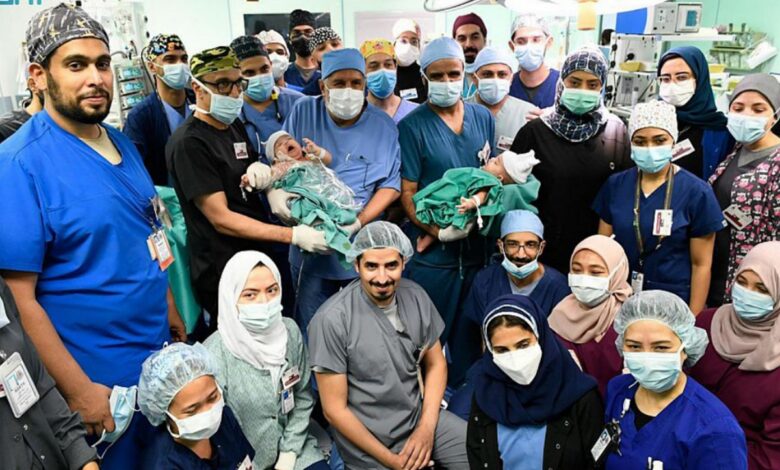 Saudi Press Agency (SPA) reported that Mawaddah and Rahma were born conjoined to the lower chest and abdomen, and according to examinations, share liver and intestines, and are suspected to be attached by a heart membrane.

The surgery started in the morning at the King Abdullah Specialist Children’s Hospital in the King Abdulaziz Medical City of the Ministry of National Guard in Riyadh under the leadership of Dr. Abdullah bin Abdulaziz Al-Rabiah.

The operation time was shortened from 11 hours to 5 hours by 28 Saudi doctors, specialists, and nurses who performed the delicate surgical procedures.

The surgery was performed in six stages: anesthesia, preparations, initiation of the resection process, resection of the liver and intestine, repositioning of the organs, and covering.

The head of the medical and surgical team in the operations of separating conjoined twins, Dr. Abdullah bin Abdulaziz Al-Rabiah, expressed his happiness in spreading the good news of achieving the 52nd achievement that is added to the Kingdom’s achievements.

Dr. Abdullah bin Abdulaziz Al-Rabiah, that the operation took place was easy in all its stages. There were no complications and the twins are in very good health.

Hudhayfa bin Abdullah Noaman, the father of the twins, extended his thanks and gratitude to the Custodian of the Two Holy Mosques and the Crown Prince – for sponsoring the humanitarian work. He also expressed his gratitude to the specialized medical team who successfully operated and separated the twins. Additionally, he praised the humanitarian work done by the Kingdom.