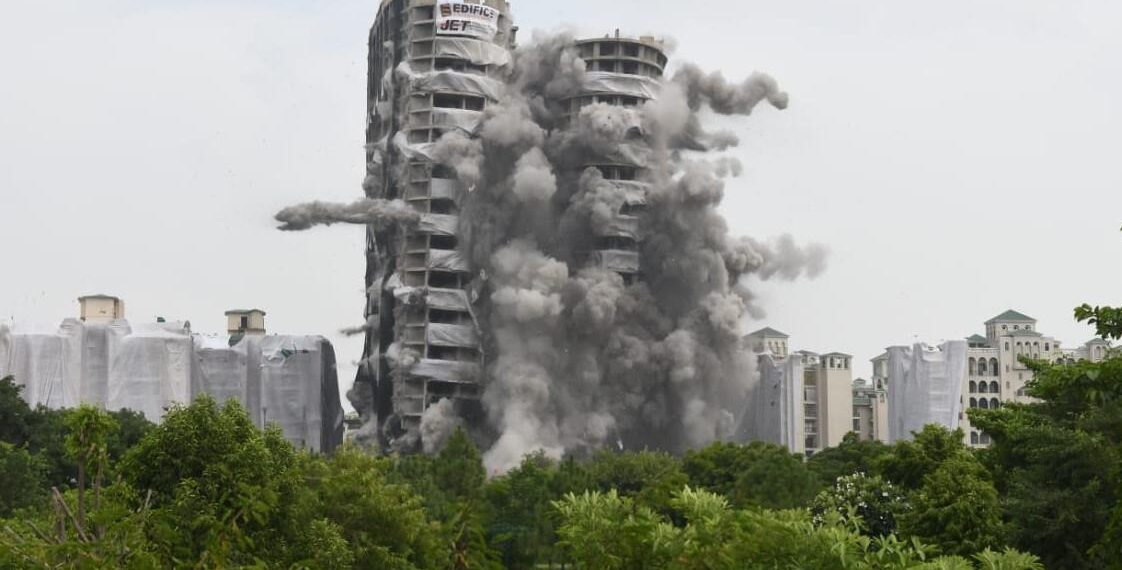 Noida, August 28: The Supertech twin towers in Noida were demolished on Sunday, a year after the Supreme Court’s direction to raze the illegally built structures to the ground.

The nearly 100-metre-high structures – taller than Delhi’s iconic Qutub Minar (73 metre) – were brought to the ground in seconds literally like a house of cards by the ‘waterfall implosion’ technique, in a breathtaking spectacle of modern-day engineering.

They were the tallest structures to be demolished in India.

Minutes after the demolition, the nearby buildings appeared to be safe. A detailed safety audit is expected later.

The Apex (32 floors) and Ceyane (29 floors) towers were under construction since 2009 within the Supertech Emerald Court housing society in Sector 93A of Noida, adjoining the national capital of Delhi.

The towers were proposed to have 40 floors with 21 shops and 915 residential apartments with a fascinating view of the city.

Over 3,700 kg of explosives were used in the implosion that brought down the building.

Before the towers were demolished, around 5,000 residents of the adjacent Emerald Court and ATS Village societies vacated their homes for the day.

The demolition of the structures leaves behind an estimated 35,000 cubic metres or 55,000 tonnes to 80,000 tonnes of debris which chiefly includes concrete rubble, steel and iron bars and would take another three months to be properly disposed of.

The Supreme Court had on August 31, 2021 ordered the demolition of the towers for violation of building norms in “collusion with district officials, holding that illegal construction has to be dealt with strictly to ensure compliance with the rule of law”.

The New Okhla Industrial Development Authority (NOIDA), also called the Noida Authority, had received a rap on its knuckles as the top court pointed out multiple incidents of collusion of its officials with Supertech Ltd in the Emerald Court project and violations of norms by the realty major in construction of the twin towers.

“The case has revealed a nefarious complicity of the planning authority in the violation by the developer of the provisions of law,” the Supreme Court had observed.

The local Noida Authority, which had approved the building maps in the first place, oversaw the mega demolition exercise which had been in planning for almost a year now.

Mumbai-based Edifice Engineering was tasked with the job and it had hired South Africa’s Jet Demolitions for its expertise. The Central Building Research Institute (CBRI) was appointed by the Supreme Court as technical expert for the project.

The top court ordered that Supertech would bear the cost of the demolition as it noted that the construction of twin towers, which was not part of the original plan for Emerald Court, directly affected the quality of life of its residents.

The only other precedence of high-rise structures in India being demolished are four housing complexes in the Maradu municipality area of Kochi, Kerala, in January 2020 in compliance with orders of the Supreme Court, which had held the 18-20 storey buildings to be illegal as they had been built in violation of the Coastal Regulation Zone norms.

Edifice and Jet Demolitions had collaborated for the Maradu complexes demolition, too. Jet Demolitions had individually successfully executed the implosion of the 108-metre-tall Bank of Lisbon building in Johannesburg, South Africa, in November 2019.

2004: Supertech gets land allotted for developing a group housing project by Noida Authority in city’s Sector 93A after which work started on ‘Emerald Court’ society.

2006: Supertech seeks more land for the project and gets approval from Noida Authority. Building plan amended to accommodate one more residential tower – total 15 now. Aster 1 to 8, Aspire 1 to 4 and Emperor 1 to 3.

2009: Developer gets building plan revised once again. Adds two more towers – Apex and Ceyane—with 24 floors and immediately begins construction. Some residents object to it, citing violation of building norms. Just about 40-50 residents were living in Emerald Court at the time.

2012: Developer revised building plan to increase number of floors to 40 in Apex and Ceyane as construction continued full swing.

August 31, 2021: Supreme Court orders demolition within three months, observing violation of building norms in collusion with local officials. Remarks that illegal construction has to be dealt with strictly to ensure compliance with the rule of law.

The Emerald Court housing complex developed by Supertech with 15 towers has around 650 flats. If permitted, the demolished Apex and Ceyane towers would have added 915 more flats and 21 shops within the same housing complex and that too in violation of building norms.