Watch: Meet first US Hijabi judge who took oath of office on the holy Quran 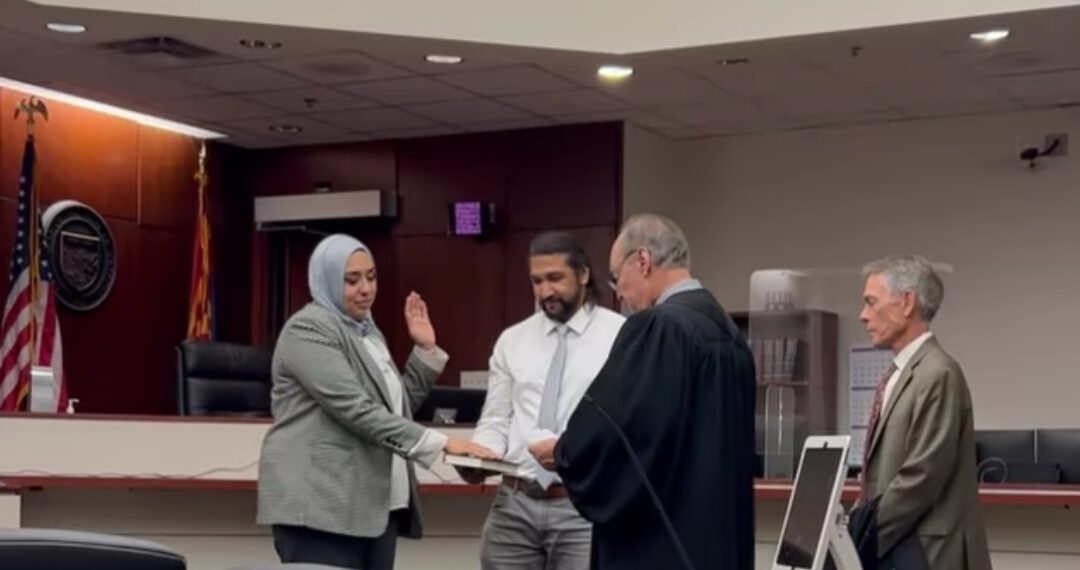 Phoenix: History was created when a hijabi US judge took the oath of office on the holy Quran a few weeks ago.

Media reports said Laila Ikram was sworn in as a judge pro tempore by Judge Enrique Medina Ochoa, the justice of the peace. Apart from being the first Muslim, Ikram is the first judge in the United State’s history to wear a hijab on the bench.

She was also the first judge to swear the oath of office on a Quran, Phoenix Business Journal reported.

She studied law at the Sandra Day O’Connor College of Law at Arizona State University.

Laila Ikram’s roots lie in Palestine, however, she now resides in North Carolina, US. Her parents are immigrants to the United States from Gaza, Palestine.

Prior to her appointment as a judge pro tempore, Ikram worked as a criminal defence attorney for the Maricopa County District Attorney’s Office.

Earlier this year, after being nominated, Ikram had to undergo a series of interviews and presentations to other judges and was approved.

Enrique Medina Ochoa made it one of his duties as an elected peace judge to bring more diversity to the court and sponsored several minority attorneys to be judges pro tempore.

Laila wants to be an important part of the Muslim community that seeks justice.

Pro tempore judges are judges who fill in things when full-time judges cannot. Becoming a pro-tem judge is the starting point for making the leap to appointment as a judge on a permanent basis.

“My whole goal with being an attorney is that I want to serve the community. Justice Courts are the highest volume courts in the county. Most people don’t have multimillion-dollar claims and issues, Justice Court is where most people resolve their issues. I feel like I have the ability to help people quickly and in a just way,” she said.

In January 2022, US President Joe Biden selected eight judges, including Nusrat Choudhury who will become the first Muslim woman to serve as a federal judge.

In October 2021, Michigan Attorney General Fadwa Hammoud also made history when she became the first Arab-American Muslim woman to argue before the US Supreme Court.