Watch Leopard getting stuck under the bonnet of a car. 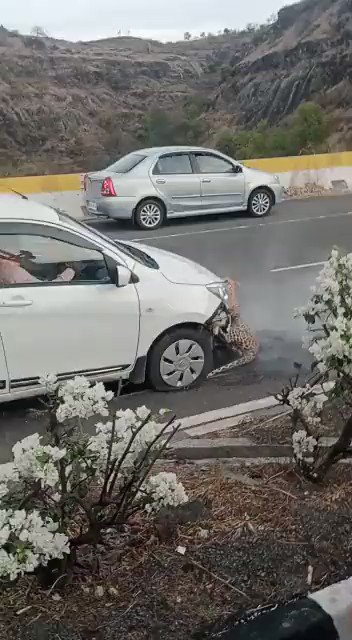 A leopard got stuck under the bonnet after it was hit by a car on a highway.

Odisha IFS officer Susant Nanda took to his Twitter account to share a video showcasing a leopard getting hit by a speeding vehicle on a busy highway.

“Wild & painful. Heartbreaking. Nothing can be more distressing than seeing our wild getting destroyed due to linear infrastructure…” he tweeted

Soon after Susant shared the video, Twitteratis flocked to the comment section to show their concern over the dreadful incident. Although the post did not reveal what happened to the canine after then, people were eager to know if it is okay.

Later, the officer shared an update that shows the leopard escaping to the wild as soon as the car makes a reverse.

“Many wanted to know as to what happened to the leopard. Here it is. Bruised, but managed to escape the impending death. Efforts on to locate & treat the injured one,” read the caption in the post.

The clip has evoked a huge response on social media. Some were relieved that the leopard was fine habitant, others expressed their anger over the government’s attitude

“Now I am a bit relaxed” and another comment read, “Glad he is ok ..forest areas should have a speed limit and a warning sign for lookout,” wrote a user