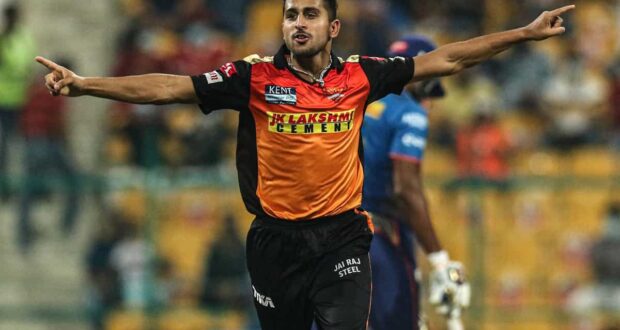 Jammu and Kashmir pacer Umran Malik was on fire against Gujarat Titans.

Sunrisers Hyderabad pacer took his career-best IPL bowling figures of 5 for 25. He was bowling at over 150 kmph.

Replying to Sunrisers Hyderabad (SRH’s) 195 for six, Titans won by five wickets to regain their No. 1 position in the points table with seven wins from eight matches.  However, it was Umran who set the internet on fire. He beat the batsmen with an express pace uprooting their stumps. He was unplayable during his five-over spell.

“Yes, this is a success. Everyone is celebrating back home. Pride of India. All credit to the swing of sultan… 20 Crore is less for #UmranMalik in the next season of IPL. Even the wife of Hardik Pandya is cheering for the king of speed. What a reputation he earned in just a couple of weeks. Star is born. #IPL20,” tweeted Guftar Ahmad, a social activist from Pir Panjal.

Former home minister P Chidambaram called Umran Malik, `The hurricane’. “The Umran Malik hurricane is blowing away everything in its way. The sheer pace and aggression are a sight to behold. After today’s performance there can be no doubt that he is the find of this edition of IPL,” he tweeted.

Umran Malik has generated some serious pace this season having hit bowling speeds of 153.01 kmph.

J&K-born pacer Umran Malik has broken another IPL record after he bowled a maiden 20th over and picked up three wickets against Punjab Kings.

J Malik, who was retained by Sunrisers Hyderabad for IPL 2022, is already one of the fastest bowlers in India. However, he has sent down deliveries over 150kmph this season.