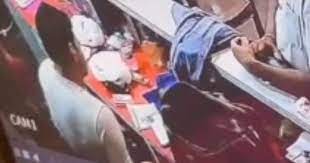 Ghaziabad: A gym trainer dying after suffering a massive heart attack has been caught on camera in the Ghaziabad district of Uttar-Pradesh.

The entire incident was caught on a CCTV camera installed in the building.

Identified as Adil, the 33-year-old man owned a gym in the Shalimar Garden area of Ghaziabad and used to exercise daily.

The incident took place at 7 pm while he was sitting in his office. He suddenly suffered a heart attack and rolled backward on the chair. His aides rushed Adil to the hospital nearby but he died on the way. Adil’s family said he was complaining of a fever for the past few days but did not stop going to the gym. Adil has four children and his entire family is in shock.