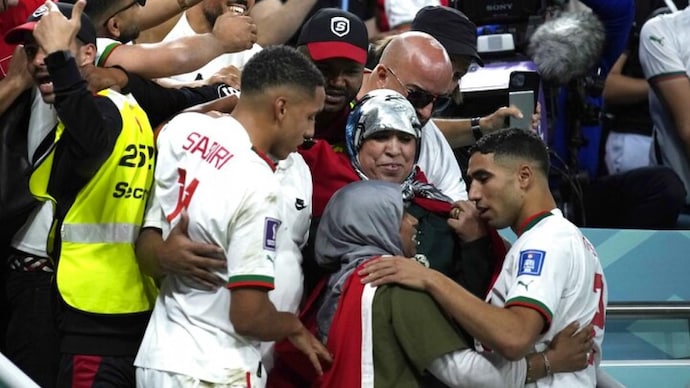 Tears of joy welled up in their eyes when Moroccon defender Achraf Hakimi went over to his mother and gave her a hug after Morroco handed a crushing defeat to Belgium in a World Cup group match.

“My mother cleaned the houses and my father was a street vendor. We come from a modest family that struggled to earn a living. Today I fight every day for them. They sacrificed themselves for me. They deprived my brothers of many things for me to succeed,” Achraf Hakimi once told Bundesliga.com.

Media reports said Saida Mou, Ashraf’s mother, used to clean houses in Spain to try to provide a decent life for her son. Her husband was a street vendor. It was because of his parents that Hakimi, who was born in Madrid and could have played for Spain, chose to turn out for Morocco.

Media reports said Hakimi would marry a talented Spanish actress Hiba Abouk. Both featured on the Vogue cover couple of months ago.