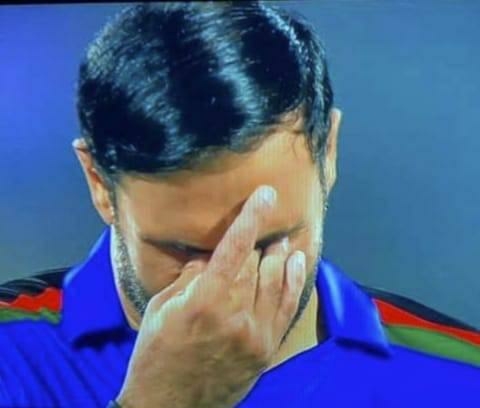 The high-octane clash between the two sides saw Afghans winning the match by 130 runs as they bundled Scotland for mere 60 runs.

While Afghanistan punished Scotland bowlers all around the park piling up 190 runs in their 20 overs, it was an emotion Afghan captain before the game that caught everyone’s attention.

When the two teams were there in the middle for the national anthem, the fans noticed tears in Afghanistan skipper Mohammad Nabi’s eyes.

Nabi couldn’t control his emotions after listening to his country’s national anthem and he broke into tears. Notably, Afghanistan is going through a tough phase for the past few months due to the takeover by the Taliban.

Mohammad Nabi was appointed as Afghanistan skipper just a few days before the commencement of the ICC Men’s T20 World Cup. Rashid Khan stepped down as Afghan T20I skipper owing to a tiff between the Afghanistan Cricket Board and the decorated spinner.

Ahead of the team’s clash with Scotland, the Afghan skipper had said, “Everyone knows that back home in Afghanistan, there’s a lot happening from the last few months. But, from a cricket point of view, everybody is ready and prepared well for this World Cup. The fans are really waiting for that because the only happiness in Afghanistan is cricket.