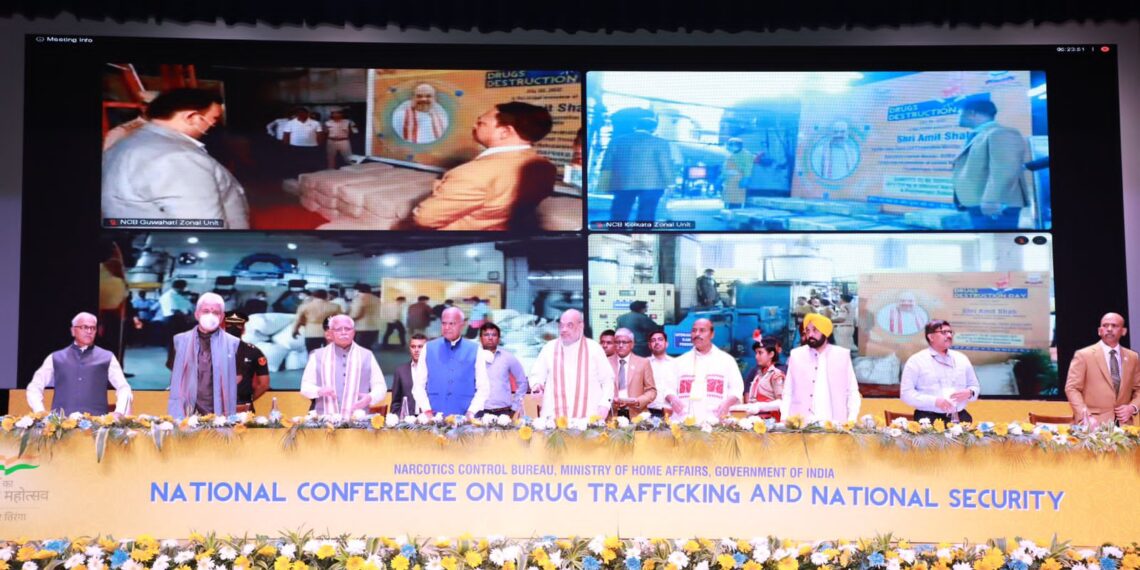 Shah was in Chandigarh, his second visit to the city within four months, to inaugurate the two-day Narcotics Control Bureau (NCB) national conference on drug trafficking and national security at Punjab Raj Bhavan. He will also inaugurate several developmental projects.

Shah said the government is holding talks with all stakeholders to make laws more stringent and has taken a proactive approach to connect with the states in the anti-narcotics efforts.

Eliminating the scourge is necessary to achieve the objective of a healthy society and prosperous nation. Also, it was important from the security point of view as “the dirty money generated from the drug trade is used in activities against the country”, the minister said.

“Everyone says the drug problem is more in Punjab, which is a border state. Therefore, we will have to make more efforts.  If the state government allots land, the Centre will set up a forensic lab in Amritsar and a small center of NCB for training purposes,” he said.

The fight against drugs, which was progressing swiftly and in the right direction, has started showing results, he said,

“In this fight, bringing states together and taking on this scourge with synergy is very important,” he said.

He said that the drugs have an adverse impact not only on those consuming them but also on society, the economy, and the country’s security. “We have to weed it out completely,”  he said.

Shah said the Home Ministry has adopted a multi-pronged approach to prevent inimical forces from using “the dirty money” generated from the drug trade against anti-India activities.

“We have adopted a proactive approach to connect the states with it (the fight against drugs),” he said.

“The results are encouraging and it shows that it isn’t a problem that can’t be weeded out completely,” said Shah, stressing that all agencies should complement each other’s efforts.

For coordination among various central and state agencies, the Narco Coordination Centre (NCORD) mechanism was set up by MHA in the year 2016 to conduct regular meetings.

This NCORD system has been restructured into four tiers up to the district level by MHA in 2019 for better coordination and cooperation and meetings are held regularly, said Shah.

“We have to give more thrust at the district level… if the desired results have to be achieved,” Shah noted.

Pointing to the presence of chief ministers of Punjab and Haryana as well as the Punjab governor at the conference, he urged them to devote at least three hours a week and a day a month to the narcotics issue.

“Till the time we do not take this approach and till the time this culture does not start from our office, it cannot percolate down below,” he said.

He expressed satisfaction that 21 states have set up an anti-narcotics task force.

He said the darknet and cryptocurrency are linked to the narcotics trade and the Home Ministry has recently set up a task force in this regard.