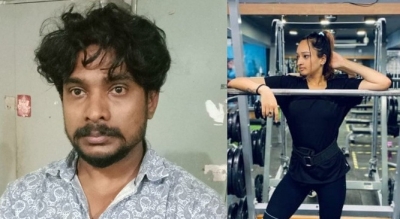 Bengaluru: The murder case of a woman by her own daughter and second husband in Karnataka took a shocking turn after police investigations revealed that the accused had fallen in love with each other and wanted to marry, police said on Friday.

Hence, they hatched a conspiracy and got the rich lady killed to lead a lavish life.

Thirty-eight-year-old Archana Reddy was murdered on the night of December 27. She was dragged out of her car by a few men and attacked with lethal weapons.

The police cracked the murder case on December 30 and arrested seven persons, including the victim’s second husband Naveen Kumar (33) and daughter Yuvika Reddy, in connection with the murder in Electronics City in Bengaluru.

DCP South East Srinath M Joshi had earlier said that the accused had conspired to kill Archana Reddy to get her property and lead a luxurious life. However, the investigations revealed that Naveen Kumar and Yuvika Reddy fell in love with each other and wanted to lead a lavish life after getting married, according to police sources.

Naveen Kumar, a gym trainer, had promised to make Yuvika Reddy, who was pursuing her B.Com, a model and trained her in the gym.

After the gyms closed down during the pandemic, he continued to train her in the house, police said.

Archana Reddy had a daughter and a son from the first marriage. Her late father was a realtor and she owned properties worth Rs 40 crore in the Jigani area of Bengaluru.

The woman got a hint about her daughter and second husband’s relationship had objected to it. She had filed a dowry case against Naveen Kumar in November.

She confronted the two threatened to disinherit her daughter from her ancestral property if she continued her relationship with her stepfather. However, the duo moved out after the fight.

Archna Reddy had also sent goons to Naveen Kumar’s house to warn him to stay away from her daughter and send her back. But, he had clarified that he would divorce her and marry Yuvika.

However, they could not lead a luxurious life as Naveen Kumar earned Rs 25,000 as a gym trainer and after lockdown, the gyms were closed down leading to a financial crunch and plotted the murder.

The investigations were based on eyewitness accounts, CCTV footage, and complaint. The police have secured the custody of the accused persons and investigated the case.

After the murder of his wife, Navin Kumar had allegedly made calls to Yuvika to inform her about the murder.