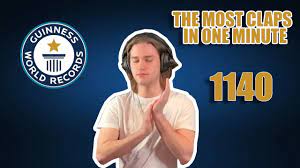 A 20-year-old youth has set a new Guinness World Record by clapping 1,140 times in a minute.

Meyer said that he got fascinated by speed clapping when he was in elementary school. “It came naturally to me, it was like I didn’t even have to practice. Really, I just for some reason knew how to do it,” the 20-year-old told to Quad-City Times.

Internet users were highly impressed by Meyer. “Good job man! You made history!” said one user

“This is a certified epic moment. Good job my guy,” said another.