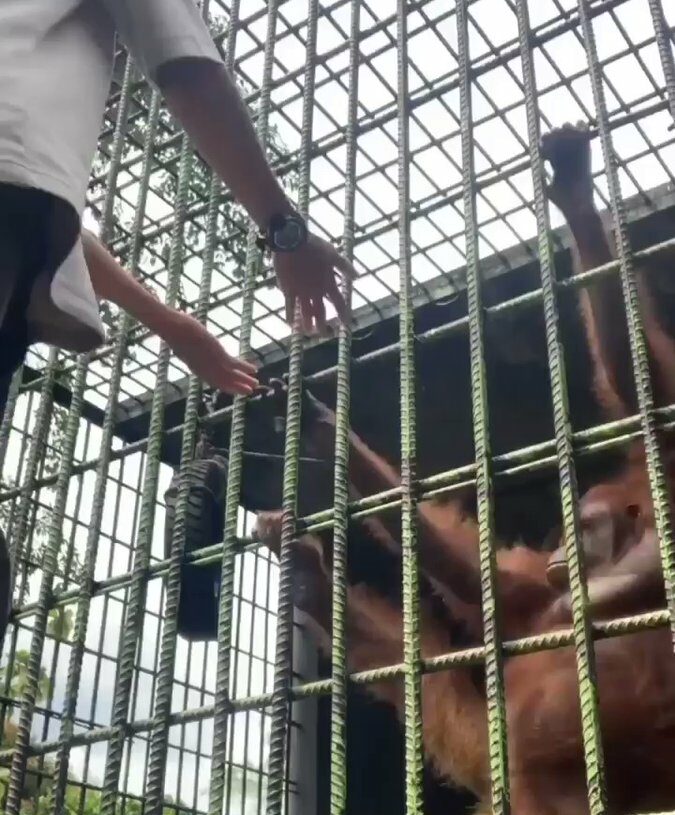 Visitors at Kasang Kulim Zoo in Indonesia were in for a big shock after a huge chimpanzee grabbed the t-shirt and leg of a man.

A video of the incident has now gone viral. In the video, a man can be seen approaching an orangutan enclosure. The ape doesn’t seem to like the presence of the visitor and grabs his t-shirt. The orangutan refuses to let go of the man. Another visitor standing nearby also tries to help the man but to no avail.

The video has notched more than 22 million views and tons of comments. The zoo even posted an explanation on its Instagram page., “Clarification from @ipin_chill with the Kasangkulim zoo on the video that has been widely circulated on social media, it is very unfortunate what happened. We, from the Kasangkulim zoo, apologize and hope this doesn’t happen again,” reads the caption of the video

Reportedly, the man allegedly crossed over the barrier, which was meant to keep the visitors away from the enclosure.

This is not the first time, such a thing has happened. Earlier, a zookeeper in Jamaica had his finger ripped off by a lion after he tried to evoke it by poking his hand through the bars of its cage. As a result, the lion held on to his finger and didn’t let go of it until it ripped apart from his hand. The horrifying incident was captured on a camera and the video garnered a lot of attention after being posted online.

Ahead of Hajj, Saudi Arabia witnesses spike in Covid cases