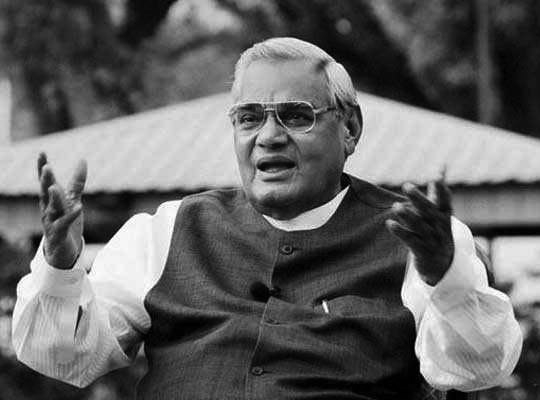 New Delhi, August 16: Fifteen years after he addressed the nation one last time from the ramparts of Red Fort, he bade the world a painful goodbye.
Atal Bihari Vajpayee, one of the most charismatic leaders, is no more. The former prime minister breathed his last on Thursday after a prolonged illness at Delhi’s All India Institute of Medical Science (AIIMS). He was 93.
Vajpayee, India’s 10th Prime Minister, was admitted to the hospital on June 11 after complaints of Urinary Tract Infection, low urine output and chest congestion.
Born on December 25, 1924, in Uttar Pradesh’s Gwalior, Vajpayee was an Indian politician who served as the Prime Minister of India between 1996 and 2004 in three non-consecutive terms.
He was a member of Parliament for over four decades, and was among the founding members of the erstwhile Bharatiya Jana Sangh which he also headed from 1968 to 1972.
When the Janata government collapsed, he restructured the Jana Sangh into the Bharatiya Janata Party (BJP) in 1980 and became the party’s first president. Vajpayee was also the first ever person from the BJP to have become the Prime Minister. In fact, several years before he became India’s Prime Minister, former Prime Minister Jawaharlal Nehru had once commented that Vajpayee will one day become Prime Minister.
India under the governance of Vajpayee had witnessed major historic events like in May 1998, India conducted underground nuclear tests in Rajasthan’s Pokhran desert. The tests were held just a month after the government had been in power. The victory of three-month-long Kargil War bolstered the image of Vajpayee and he was hailed across the country for his bold and strong leadership.
A vocal politician on the issue of Kashmir, Vajpayee made sincere efforts to normalise relations between India and Pakistan. He travelled to Pakistan on Delhi-Lahore Bus Service in its inaugural run on February 19, 1999 to attend the Lahore Summit. Vajpayee was received at Wagah by then Pakistan Prime Minister Nawaz Sharif. However, the warmth and bonhomie of this was shortlived as just three months later in May, the Pakistani Army led by its then chief Pervez Musharraf, orchestrated an attack on India in Kargil sector without the knowledge of Sharif to sabotage India-Pakistan relations. In 2016, Sharif conceded that intrusion in Kargil by Pakistan was an act of ‘backstabbing’ Vajpayee who had extended hand for friendship.
Later, at the Agra Summit with Musharraf in 2001, Vajpayee stood firm on his position and refused to make compromises to save relations on the issue of Kashmir. His tough stand eventually saw Musharraf going back empty handed as the talks had failed.
Vajpayee was conferred the nation’s highest civilian honour — Bharat Ratna — by the President of India in 2014. Incumbent Prime Minister Narendra Modi government in 2014 declared Vajpayee’s birthday, 25 December, as ‘Good Governance Day’.
In his personal life, Vajpayee was a versatile poet and a writer. He was fond of food, Indian music, dance and loved nature. One of his favourite retreats was Manali in Himachal Pradesh. About this, Vajpayee said: “My poetry is a declaration of war, not an exordium to defeat. It is not the defeated soldier’s drumbeat of despair, but the fighting warrior’s will to win. It is not the dispirited voice of dejection but the stirring shout of victory.”

New Delhi, August 16: Former Prime Minister Atal Bihari Vajpayee dies in New Delhi on Thursday, after a prolonged illness.
Leaders from both sides of the aisle have condoled his death.

Modi says ‘India grieves the demise of our Atalji’

“His passing away marks the end of an era. He lived for the nation and served it assiduously for decades. My thoughts are with his family, BJP Karyakartas and millions of admirers in this hour of sadness. Om Shanti,” tweeted Prime Minister Narendra Modi.
“It was Atal Ji’s exemplary leadership that set the foundations for a strong, prosperous and inclusive India in the 21st century. His futuristic policies across various sectors touched the lives of each and every citizen of India.”
“Atal Ji’s passing away is a personal and irreplaceable loss for me. I have countless fond memories with him. He was an inspiration to Karyakartas like me. I will particularly remember his sharp intellect and outstanding wit.”
“It was due to the perseverance and struggles of Atal Ji that the BJP was built brick by brick. He travelled across the length and breadth of India to spread the BJP’s message, which led to the BJP becoming a strong force in our national polity and in several states.”

“Pained beyond words at the demise of Atalji. He had cherished the ideal of a developed and powerful India in which all persons lived together in unity, peace and harmony,” said Home Minister Rajnath Singh on Twitter.
“Atalji was a true ‘Ajatshatru’ who had many friends across the political spectrum. He believed in political consensus and his beliefs had consequential effect on Indian politics.”
“In Atalji’s demise the nation has lost a stalwart who was known for statesmanship and astute leadership. It is also a huge personal loss to me. I am one of those millions of Indians who drew inspiration from Atalji’s life and contribution.
“I cannot fully imagine my own life without following the footprints that Atalji set. May his soul rest in peace.”

Vajpayee had no enemies, says Chidambaram

Atal Bihari Vajpayee, who was often described as the moderate face of the BJP, was a true believer in a multi-party democracy, Left parties said.
Left leaders, who were otherwise strong critics of the former prime minister’s ideology, said Vajpayee always kept open the lines of consultation when he was in government and reached out to opposition parties before taking important decisions.
“When the US invaded Iraq and asked India to be a part of the coalition forces, Vajpayee had called Left leaders — CPI leader A B Bardhan and CPI(M) leader Harkishan Singh Surjeet – at an all-party meeting to discuss the matter.
“Left leaders had raised objection to India supporting the US. Vajpayee told the Left leaders that ‘jao bahar jake jor se bolo’, meaning they should raise their voice against the US on streets. Next day Parliament passed a resolution stating India will not be part of the coalition forces,” CPI leader D Raja said.

Congress president Rahul Gandhi tweets “Today India lost a great son. Former PM, Atal Bihari Vajpayee ji, was loved and respected by millions. My condolences to his family & all his admirers. We will miss him.”

Vajpayee will be remembered for remarkable leadership: Naidu

Vice President M Venkaiah Naidu condoled the demise of former prime minister Atal Bihari Vajpayee, saying he will be remembered for his remarkable leadership and devotion to duty.
“I visited him this morning but didn’t imagine that the end will come so soon. He is, undoubtedly, one of the tallest leaders in post- independence India,” he said in his condolence message.
Naidu said Vajpayee’s contribution to strengthen democracy and good governance has been stupendous. He successfully ran a coalition of 23 parties with his rare persuasive charm and competence, he recalled.
“He will be remembered for ushering in the connectivity revolution in the country. His personality, oratory, devotion to duty and friendliness all combined in his remarkable leadership will be remembered for a along time to come,” he said.

BJP chief Amit Shah paid heartfelt tributes to former prime minister Atal Bihari Vajpayee, saying he nursed the party to make it a banyan tree and left an indelible mark in Indian politics.
“Atalji emerged as a popular national leader who believed that power is a means of service and led a spotless political life without compromising on national interest. And that’s why the people across political and social boundaries showered him with love and respect,” Mr. Shah tweeted.
“A rare politician, brilliant speaker, poet and patriot, his demise is not just a irreparable loss for the BJP but also for the entire country,” the BJP chief said, adding that his thoughts, poems, foresight and political skills would always inspire and guide all.

“I am at a loss of words to express my deep grief and sadness today as we all mourn the passing away of one of India’s tallest statesmen, Shri Atal Bihari Vajpayee. To me, Atalji was more than a senior colleague- in fact he was my closest friend for over 65 years,” said L.K. Advani.
“As my senior, he always encouraged and guided me in every possible manner.
“His captivating leadership qualities, mesmerising oratory, soaring patriotism and above all, his sterling humane qualities like compassion, humility and his remarkable ability to win over adversories despite ideological differences have all had a profound effect on me in all my years in public life,” Mr. Advani said.

“Deeply pained by the passing away of our beloved Atal ji. India has lost a great leader, a leader of masses and a visionary who dedicated his entire life in service of the nation and its people,” said Goa Chief Minister Manohar Parrikar.
His words were our strength, his blessings were our energy, said Madhya Pradesh Chief Minister Shivraj Singh Chauhan. Mr. Chauahan also said Mr. Vajpayee dedicated his life to serve the the nation.
Bihar Chief Minister Nitish Kumar, in his condolence message, said the nation has lost an important political figure who was also an orator, poet, writer, and intellectual.
Odisha Chief Minister Naveen Patnaik expressed deep grief over demise of former prime minister Atal Bihari Vajpayee and described him as one of the “tallest leaders” of the country. “I am deeply grieved over demise of Vajpayeeji. India has lost one of its tallest leaders. He was loved by the people of India and of course the people of Odisha as well. May his soul rest in peace,” Mr. Patnaik said.