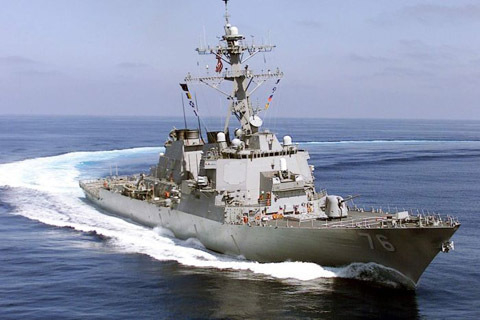 Washington:A US warship sailed close to disputed islands in the South China Sea, a move that is bound to draw the ire of Beijing and came amid heightened tensions between the two nations.
Two defence officials told CNN that the guided-missile destroyer USS Decatur sailed on Sunday within 12 nautical miles of Gaven and Johnson reefs in the Spratly Islands as part of what the US Navy calls “freedom of navigation operations”, which are meant to enforce the right of free passage in international waters.
“US Forces operate in the Indo-Pacific region on a daily basis, including the South China Sea. All operations are designed in accordance with international law and demonstrate that the US will fly, sail and operate wherever international law allows,” one official said.
The freedom of navigation operations “challenge excessive maritime claims and demonstrate our commitment to uphold the rights, freedoms, and uses of the sea and airspace guaranteed to all nations under international law”, he added.
While the Navy conducts such freedom of navigation operations all over the world, Beijing is particularly sensitive about the operations when they come near areas where the Chinese government has built islands and established military facilities on disputed maritime features.
The last such freedom of navigation operation took place in May when the US Navy sailed two warships within 12 miles of four of the Paracel Islands in the South China Sea.
China claims both the Spratly and the Paracel islands however those claims are rejected by much of the international community.
Earlier this week, the US flew B-52 bombers over the South China Sea and East China Sea, areas considered sensitive by the Chinese military, CNN reported.
The flights drew a protest from Beijing, which labelled them provocative.