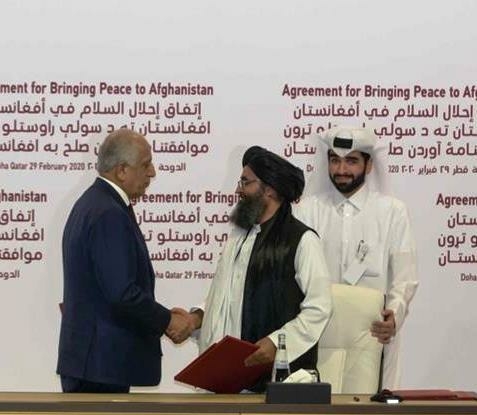 Doha (Qatar), Feb 29: In a bid to end 18 years of conflict in Afghanistan, the Taliban and the United States on Saturday signed a peace agreement. As per the joint statement released by the US and Afghan governments, the US and NATO would withdraw all troops in Afghanistan within 14 months if the Taliban upheld its commitments.
“The Coalition will complete the withdrawal of their remaining forces from Afghanistan within 14 months following the announcement of this joint declaration and the US-Taliban agreement…subject to the Taliban’s fulfillment of its commitments under the US-Taliban agreement,” the statement was quoted as saying by news agency
The deal was signed in the Qatari capital Doha by American special envoy Zalmay Khalilzad and Taliban political chief Mullah Abdul Ghani Baradar. The US Secretary of State Mike Pompeo was on hand to witness the ceremony.
After signing the accord, Pompeo also urged the Taliban to “keep your promises to cut ties with Al-Qaeda”, AFP reported.
News agency Reuters reported that as per the deal, the US and the Afghan governments will release up to 5,000 prisoners and the Afghan Taliban will release up to a thousand prisoners by March 10. Also, in the first 135 days after the deal, the US, its allies and the coalition will pull out forces from five military bases.
Meanwhile, news agency PTI reported that the US has committed to reducing its troop presence in Afghanistan to 8,600 as part of its agreement with the Taliban, but there is no obligation for America to withdraw troops if the Afghan parties are unable to reach an agreement, officials were quoted as saying.
The US currently has an estimated 13,000 troops in Afghanistan.
What happens to President Ashraf Ghani-led government in Afghanistan after the peace deal will be something that New Delhi will watch. Under Prime Minister Narendra Modi, India has developed a close relationship with Ghani, and both have been on the same side regarding Pakistan-sponsored terrorism. Shringla’s outreach to top officials in the Ghani government is a step in that direction.
A day ahead of the signing of a peace pact between the US and Taliban in Doha, the government Friday sent Foreign Secretary Harsh Vardhan Shringla to Kabul where he conveyed “India’s support to the government and the people of Afghanistan” in their efforts to bring “peace and stability through an inclusive & Afghan-led, Afghan-owned & Afghan-controlled efforts”.
Though India has softened its position on engaging with the Taliban, it has always maintained that it has three red lines — which it spelt out when the US, Russia and China were conducting their negotiations with the Taliban last year. (Agencies)