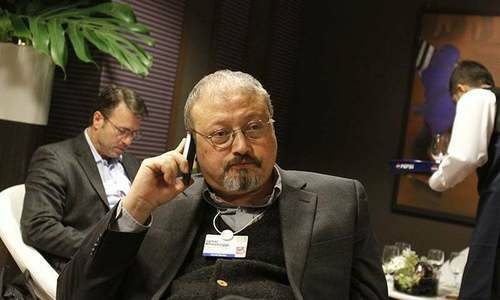 Turkish claims that a well-known Saudi writer and government critic was slain inside his country’s diplomatic mission in Turkey have put the Trump administration in a delicate spot.
Members of Congress have grown increasingly insistent in recent days that the administration get to the bottom of the disappearance of Jamal Khashoggi, a writer for The Washington Post. He had apparently drawn the wrath of the Saudi government, which has become an ever-closer United States (US) ally under President Donald Trump.
Angry lawmakers likely won’t cause the administration to turn away from Saudi Crown Prince Mohammed bin Salman. But they could throw a wrench into arms sales that require their approval and demand the US scale back support for the Saudi military campaign against rebels in Yemen.
Republican Sen. Lindsey Graham of South Carolina has warned that if there was any truth to the allegations of wrongdoing by the Saudi government, it would be “devastating” to the US-Saudi relationship.
Sens. Chris Coons, D-Del., and Thom Tillis, R-N.C, said the disappearance of the journalist sends a “chilling message” and called for the Saudis to “immediately investigate and verify Jamal’s location”.
Sen. Rand Paul, R-Ky, a longtime critic of the Saudi government, went further. He said he’ll try to force a vote in the Senate this week blocking US arms sales to Saudi Arabia. He told local radio in his home state that he wants to end the arms shipments if there’s “any indication” the Saudis are “implicated in killing this journalist that was critical of them”.
Saudi Arabia denies involvement in Khashoggi’s disappearance, and the Trump’s administration’s response has been far more cautious than that coming from Capitol Hill.
The administration has expressed concern but has refused to even entertain questions about what the consequences would be if Turkish allegations turn out to be true that the 59-year-old journalist was killed inside the Saudi consulate in Istanbul after entering it on Oct 2 to get routine paperwork for his marriage while his Turkish fiance waited outside.
“We don’t know what has happened to him. We don’t have any information on that,” State Department spokeswoman Heather Nauert told reporters on Tuesday. “That’s why I want to say, we don’t want to make any judgements about what happened, and we call for a thorough and transparent investigation.”
The Washington Post said it has repeatedly asked the Saudi and Turkish governments for information about Khashoggi’s whereabouts but has not received any satisfactory answers.
“Instead, reports about Jamal’s fate have suggested he was a victim of state-sponsored, cold-blooded murder,” CEO and publisher Fred Ryan said in a statement late on Tuesday. “Silence, denials and delays are not acceptable. We demand to know the truth.”
Analysts said there were reasons for skepticism about the Turkish account. Ties between Ankara and Riyadh are at a low point over Turkey’s support for Qatar in that country’s year-long dispute with Saudi Arabia and other Gulf nations. Saudi Arabia is also annoyed by Ankara’s rapprochement with the Kingdom’s archrival, Iran.