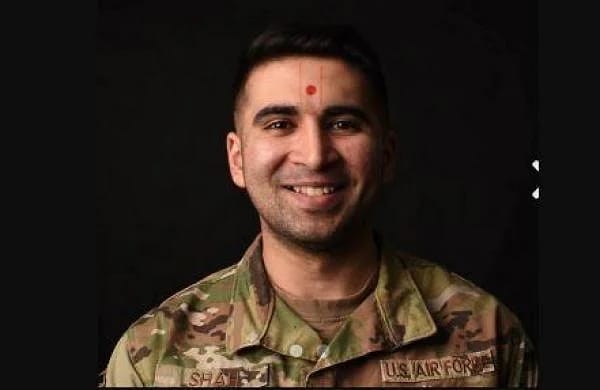 NEW DELHI: US Air Force has permitted Indian-origin Hindu airman to wear a `Tilak’  while in uniform.

An aerospace medical technician assigned to the 90th Operational Medical Readiness Squadron, Darshan had been seeking a waiver since he joined the military two years back. His religious accommodation waiver was approved last month.

“We live in a country where we’re allowed to practice and have faith in what we want. That’s what makes this such a great country. We’re not persecuted for what we follow or believe. If it wasn’t for the first amendment, I wouldn’t be able to do this at all. I wouldn’t be able to be who I am while being a military member or even a citizen,” said Shah through an official communication of the 90th Missile Wing Chaplain Corps.

Shah grew up in Eden Prairie, Minnesota, in a Gujarati household who are followers of Bochasanwasi Shri Akshar Purushottan Swaminarayan Sanstha or BAPS. The religious symbol of this sect is a red dot or Chandlo surrounded by an orange U-shaped tilak.

He began seeking a waiver allowing him to wear the Tilak Chandlo in uniform since attending basic military training in June 2020. He spoke with the Superintendent of Personal Programs at the Air Force Global Strike Command monthly for updates on the status of his waiver, till it got approved.

“For some Airmen, displaying aspects of their religious faith is a matter of sincere personal responsibility though at times it may conflict with uniform rules and regulations. For one Mighty Ninety Airman, it means seeking a religious waiver to wear a Tilak Chandlo in uniform,” said a statement issued by the 90th Missile Wing Chaplain Corps.

Shah wants to become a commissioned officer and serve as a doctor after earning his degree. Francis E Warren Air Force Base is a US Air Force base located three miles west of Ceyenne, Wyoming. It is one of the three strategic missile bases in the US.