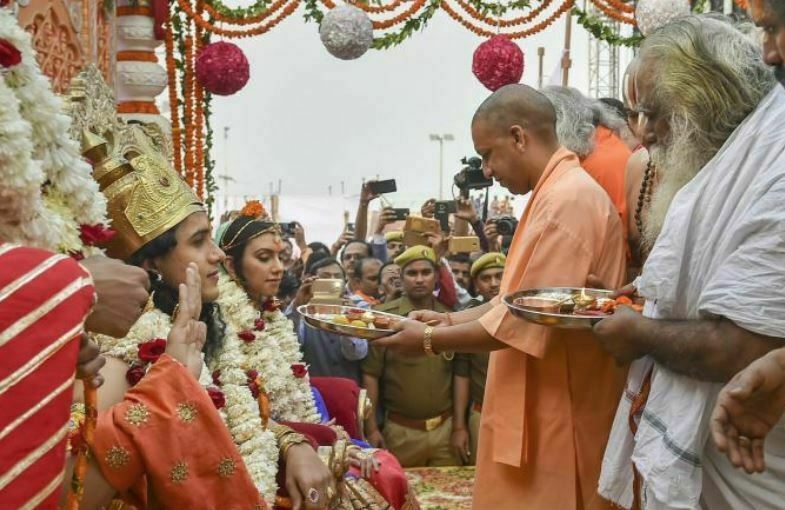 His visit to Ram Janmabhoomi site came a day after the three-day Deepotsav ended, in which Korean First Lady Kim Jung-sook was the chief guest on the last day.
“He arrived in Ayodhya this morning around 8:30 am from Faizabad where he stayed at the Circuit House last night. First, he visited Hanuman Garhi, and then the Ram Janmabhoomi, where he spent some time,” Faizabad BJP president Awadhesh Pandey said.

Pandey said he accompanied the chief minister at a few of the temple visits, during which Yogi also interacted with several religious leaders. Security was stepped up at the Ram Janmabhoomi site, where a large number of people from cross the country on Wednesday visited on Diwali.

A police official said about 20,000 people visit the site on Diwali, almost double the footfall recorded on regular days, adding Yogi Adityanath went in the morning.

Local residents said the chief minister had visited the birthplace of Lord Ram after last year’s Deepotsav as well.

Yogi’s visit to Ram Janmabhoomi site came at a time when the chorus has grown within the party and the Sangh Parivar, seeking construction of a temple through an ordinance. At present, a statue of Ram Lalla (child avatar of Lord Ram) is kept at the site, which attracts devotees from far and wide.

The Supreme Court recently fixed the Ram Janmabhoomi-Babri Masjid land dispute cases for the first week of January next year before an appropriate bench, which will decide the schedule of hearing.

As many as 14 appeals have been filed against the 2010 Allahabad High Court judgement that suggested that the 2.77 acres of disputed land be partitioned equally among three parties – the Sunni Waqf Board, the Nirmohi Akhara and Ram Lalla.

Pandey said after visiting the Ram janmabhoomi, Adityanath went to Kanak Bhawan temple and then to Sugriv Kila, located in the heart of Ayodhya. He then visited Maniram Das Ki Chavni and Digamber Akhada.

“Yogiji also inspected a site near Sarayu river for a planned statue of Lord Ram there. He later went to Gorakhpur where he met children of a tribal village and attended a programme there,” he said.

Pandey said one of the probable sites is a patch of land between the Ram Ghat Halt and railway-bridge on Sarayu, which Yogi inspected. Incidentally, Ayodhya Mayor Rishikesh Upadhyay had recently said that plans are afoot to install a statue of Lord Ram on the banks of the Saryu river.

Yogi’s Wednesday visit comes a day after he announced that Faizabad district will now be renamed as Ayodhya.

Pandey had on Tuesday said that the option to resolve the Ayodhya dispute through community dialogue is “over” and the BJP will work towards the construction of a Ram Temple here through constitutional or legislative means.

The Faizabad BJP chief also claimed that majority population of Ayodhya want to see the temple getting built as it is a “matter of faith” for them and “BJP is the only party that raises this issue for them”.

Many experts have said that the Ayodhya land dispute matter should be taken up by the court after the 2019 elections, as it might affect the voters.

The Akhil Bharatiya Sant Samiti, an umbrella body of Hindu seers, in New Delhi on Sunday had “directed” the Narendra Modi government to bring in legislation or an ordinance to build the Ram temple in Ayodhya.