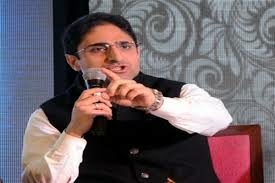 SRINAGAR: Seemingly upset by the “politically motivated” campaign, Srinagar Municipal Corporation (SMC) Mayor Junaid Azim Mattu on Thursday said he would file a criminal defamation case against all four Corporators for linking his office with the unauthorized arrival of a COVID positive case.

“Four SMC Corporators at the expected encouragement and incitement of a certain mischief monger have uploaded videos on social media alleging that I facilitated the unauthorized entry of the particular positive case into Srinagar. Under my instructions, my lawyers are under the process of filing criminal defamation cases against all four individuals today. Their lies and attempted propaganda constitutes a criminal offence and they shall be made answerable to the court of law for their baseless and motivated allegations,” Mattu said in a statement.

Srinagar mayor said politically motivated, disappointing and ulterior attempts to connect SMC or his office with this particular case are distasteful and unfortunate. “Politics can wait and can be resumed after the pandemic is over. For those who are trying so hard to engineer an elaborate conspiracy, in this case, I wish them better mental health and hope they realize how their mischief mongering could impede efforts required to fight against COVID,” he said.

Trying to set the records straight, he said he was not even aware of the fact that the Corporator has a brother, to begin with.

“I wasn’t at any point in time aware of his reported unauthorized travel or arrival in Srinagar. This is evidenced by the fact that the particular Corporator visited my office after the arrival of his brother. Had I been aware of his brother’s arrival on April 26 and subsequent administrative quarantine on April 28, I wouldn’t have endangered my safety and health by allowing any proximity with his primary contacts. That’s basic common sense and should be enough to discredit the baseless allegations against me,” he said.

Police have registered a case under relevant sections and the law will take its course to unravel the truth.  “As soon as I was informed about this case, I passed instructions for immediate isolation and home quarantine of several SMC Corporators and officials including myself. I have been in strict self-isolation and home-quarantine ever since and continue to supervise SMC operations and initiatives from my residence while continuing to insist that all possible precautions should be taken within the SMC,” he said.