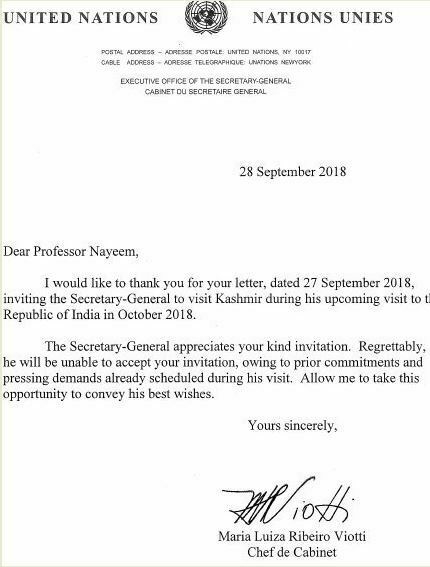 Srinagar, Sep 30: The United Nations Secretary General, Antonio Guterres, has declined the invitation of a valley-based civil society group requesting him to visit Kashmir during his upcoming India tour.

Kashmir Centre for Social and Development Studies (KCSDS), on September 27, had written an email to the UN Chief inviting him to the valley during his ensuing visit to India from 1-3 October.

A day later, it received a reply from the office of the UN Chief declining the invitation.

“The Secretary General appreciates your kind invitation. Regrettably, he will be unable to accept your invitation, owing to prior commitments and pressing demands already scheduled during his visit,” read the reply from Maria Luiza Ribeiro Viotti, Chef de Cabinet to the UN Chief.

Earlier in its invitation, KCSDS had asked Guterres to visit Kashmir to have “first-hand information and experience of the ground reality of Kashmir and the ‘ordered and monitored disorder’ with the highest military concentration armed with AFSPA.”

“As you are visiting India at a time of grave crisis in the  disputed State of Jammu and Kashmir, the civil society—Kashmir Centre for Social and Development Studies (KCSDS) considers it a great  opportunity to invite you to visit Kashmir,” read the 500-plus word email invitation.

In it, the civil society group had specifically pointed out India’s cold response to the recent UN report on Kashmir encompassing the human rights violations in the region between June 2016 and April 2018.

“You are aware of the fact how Indian government and its various agencies dismissed the report with disdain and arrogance of power and levelled allegations against your commissioner,” the KCSDS wrote in the email invitation.

The civil society group, the email added, told the UN Chief that his personal visit could be a great boost to the suppressed people and “serve to confirm with greater vigour what your office has already found out and is now widely known.”

“Your visit could pressurise the Indian state to take affirmative action on the ground of Kashmir, put a stop to gross human rights violations at political, economic, civil, cultural and environmental level carried through unprecedented deployment of military forces and its own delegated bureaucrats which is a new norm of people’s rule (democracy) in Indian Lexicon.”