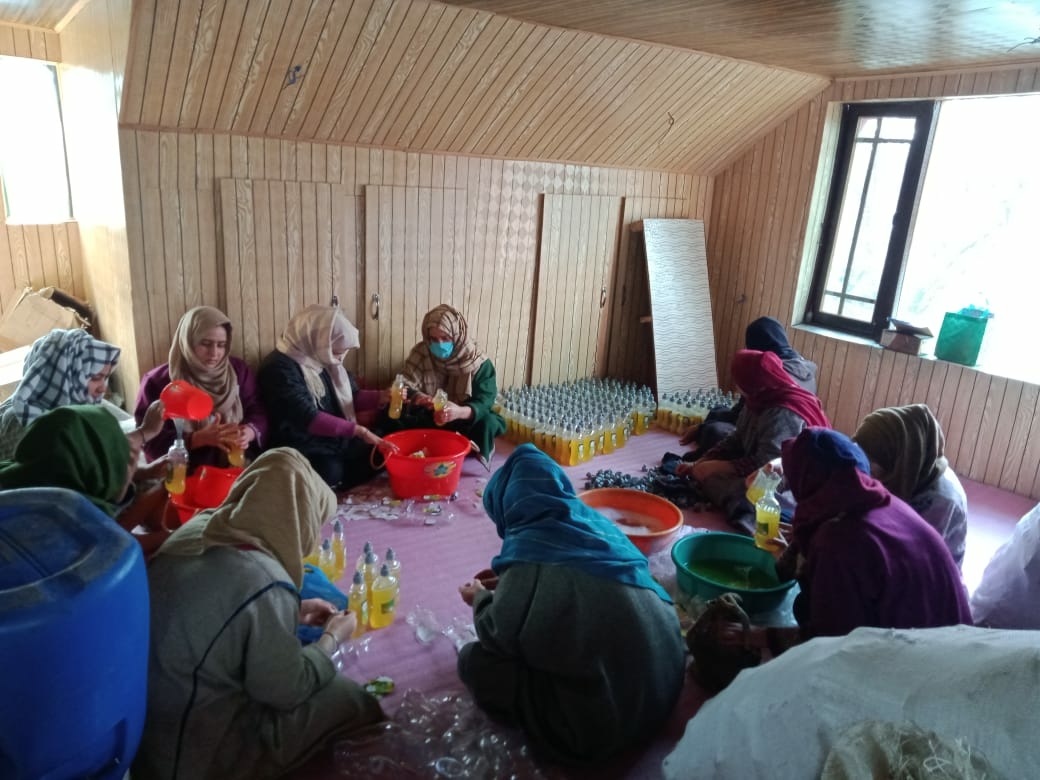 Srinagar: Gousia Sulaiman chokes with emotions when she recalls the day her brother dropped out of school because of a life-threatening illness.

Daughter of a labourer, she was at the crossroads of life after her family spent entire finances on her brother’s treatment. She took to knitting sweaters to help the family and fund her education. However, that was not enough to make the ends meet.

Enter Centre’s UMEED; Gousia got a new lease of life.  She became a part of Self Help Group (SHG) in 2017 and started to eke out her living. Come 2021, the SHG forayed into branding and marketing sanitizers, bathroom cleaners, and other disinfectants.

Five months on, `Santwin’ is gradually making a mark in the highly competitive market.  Marketed under `Saffron Cleaning Reagents’, the SSG in the Pampore area has created quite a buzz in Kashmir.

“We were facing a lot of financial problems. My brother had to drop out of school. But I was passionate about studies. I took to knitting sweaters to fund my education. Later I joined SSG in 2017.  From January this year, we started packing and branding sanitizers and other products. We are 20 girls associated with this SSG,” said Gousia, who is MA in Public Administration.

Under National Rural Livelihood Mission (NRLM’s) UMEED scheme, the  Centre reaches out to poor women in rural areas and encourages them to create SHGs. Each woman is encouraged to deposit Rs 100 monthly. Later, some of the women take loans against the deposits for starting a small business and repay it in easy monthly installments.

“We started SHG with 10 members and named it Gousul Azam. We saved Rs 100 every month. Later we got Rs 15000 loan under UMEED.  Three of us took Rs 5000 loan for business purposes. Since I was interested in tailoring, I took the loan to buy a machine,” said Uzma Wani, who is one of the members of the group.

After a successful debut, the women wanted to spread their wings. So they decided to increase the number of members. “We took Rs four lakh loan and increased the number to 20. After research, we started branding and packing the sanitizers and other items,” she said.

Jammu and Kashmir government has allotted space to the SHG for running the business. “We are getting raw materials from Bhaderwah. We then pack and label it in our facility. Later we sell it in the market. NRLM officer Arsheed Sahab (Programme Manager NRLM Arsheed Ahmad Bhat) helped us a lot by getting orders worth Rs two lakh,” said Uzma.

SHG is currently dealing with sanitizers, bathroom cleaners, acid, phenyl, dish wash gel, and hand washes. “A Khanmoh based group has ordered products worth Rs two lakh. Plus shopkeepers have also committed to buying our products. Since there is a lockdown, we are waiting to dispatch our goods,” said Uzma.

Nelofar, the NRLM cluster coordinator for Pampore, said they encourage women in villages to set up self-help groups. “Each group has to hold at least one meeting every week. Each member has to deposit Rs 100 per month. Later they can go for inter-group lending to help each other,” she said.

'Covid vaccination to be deferred by 3 months after recovery': Here are new recommendations by Centre