Ukraine war fallout: In a first, UN to debate vetoes of permanent members 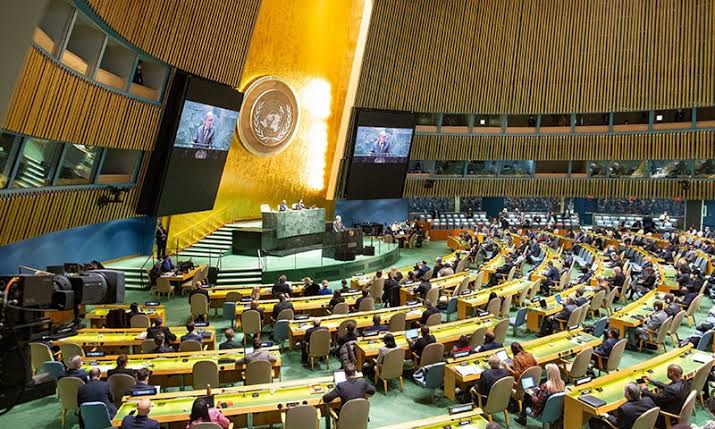 United Nations: UN General Assembly has voted on a measure seeking to make the five permanent members of the Security Council answerable for their vetoes.

Although India criticized it as inadequate, it went along with the unanimous approval of it.

With action on the invasion of Ukraine held hostage by Russian vetoes at the Council, the UN General Assembly on Tuesday adopted the resolution that would require it to meet within 10 days after a veto has been cast in the Council to debate the veto and give the vetoers a chance to speak to it.

While reiterating India’s call for a complete reform of the Council, Deputy Permanent Representative R. Ravindra said the resolution was a “flawed approach (that) is, therefore, an aberration” that cannot address the totality of the problems with the Council’s role and powers.

The resolution also demands that the Council have to send a report on the veto to the Assembly.

The resolution proposed by Lichtenstein was co-sponsored by more than 80 UN members, including permanent members — US, Britain, and France.

The other permanent members, China and Russia, did not press for a formal vote on the resolution in the face of the wide support for it and went along with it, even though Beijing said it was opposed to it.

Speaking to reporters in Moscow where he is on a mediation mission for the Ukraine conflict, UN Secretary-General Antonio Guterres said, “I’m very much in favor of a moderate use of the veto, having no illusions about the possibility of changing it.”

Without reform, the Assembly can do very little about the veto powers as the permanent members “have a veto over the veto”.

“As rightly called out by our African brothers and sisters, it goes against the concept of sovereign equality of states and only perpetuates the mindset of the Second World War, to the victor belongs the spoils,” he said.

“Either all nations are treated equally in the context of voting rights or else the new permanent members must also be given the veto,” he added.

At his Moscow news conference, Guterres echoed similar ideas when asked by a reporter about the Assembly resolution.

He said, “It’s important to enlarge the Security Council and to have a more equitable representation, particularly (for) the countries (in) Africa.”

As a “double victim of colonialism,” the UN Chief said, “Africa is underrepresented in decision-making processes, in most of the multilateral institutions. And so, I do believe that a stronger representation of developing countries in many areas, from the Bretton-Woods institutions (like the World Bank and International Monetary Fund) to the Security Council, would be an important reform.”

But Guterres was skeptical that there would be enough votes in the Assembly or a willingness by the permanent members to abolish the veto power, which he said was introduced to prevent a situation of confrontation among permanent members that “might lead to another global war”.

Ravindra said the comprehensive reform, which the leaders of UN members have mandated, has been blocked by a “vocal minority of nay-sayers”.

“The only way to begin to remedy what ails the Security Council is to make it more representative, credible, and legitimate by including more underrepresented voices — including from developing countries and from Africa,” he added.

Those who oppose the reform process occurring in stages are, in this case, advocating a “piecemeal initiative” through the resolution, he said.

Without naming it, Ravindra took aim at a group of countries called Uniting for Consensus (UfC) led by Italy and including Pakistan, calling it “a vocal minority of nay-sayers have held the entire process of Security Council reform hostage over the last four decades”.

The UfC has blocked the reform process, known as the Intern-governmental Negotiations (IGN), from even adopting a negotiating text to be the basis of discussion claiming that it can only be done after there is consensus on all the issues.