Ukraine-Russia war: For the first time since WW II, Jesus Christ statue taken out of Armenian Cathedral; to be stored in bunker for safety 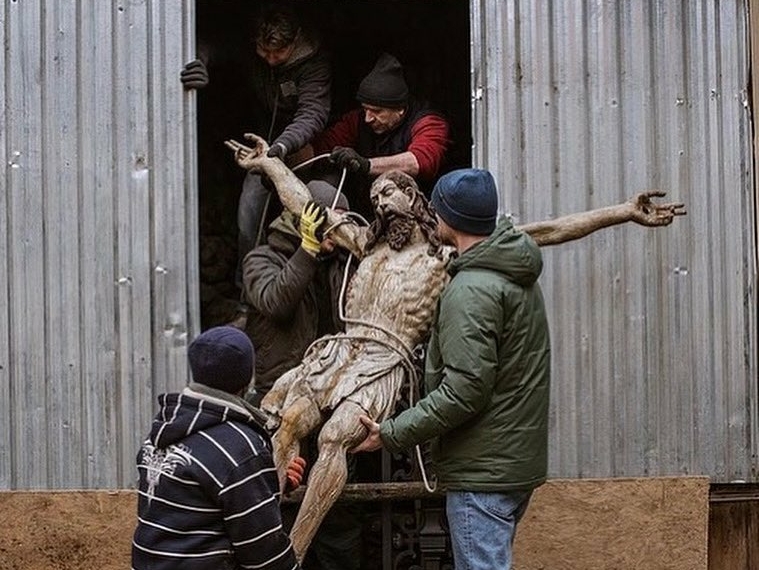 For the first time since World War II, the statue of Jesus Christ has been taken out of Armenian Cathedral of Lviv, Ukraine.

The statue will be stored in a bunker for protection.

Meanwhile, rescuers pulled out nine people from the rubble. All nine people were killed when Russian forces hit the building in Sumy. Those killed included two children.

Head of Sumy Regional State Administration Dmytro Zhyvitskysaid that Russian planes dropped bombs on residential areas of the city. There are dead and wounded, including children.

Earlier, the Ukrainian military paraded captured Russian soldiers before the media and forced them to say sorry for their invasion.

Ten Russians in green fatigues were lined up before the press and cameras. Some of them stared at their boots and avoided looking at the cameras, while others appeared more at ease.

It was the second such act in a week organized by Ukraine’s SBU intelligence service.

Last month, Ukraine unleashed a new wave of psychological warfare by launching a website to help Russian families track down soldiers killed or captured during Moscow’s invasion. `200rf.com’ contains photos and videos, some of them graphic, about soldiers who Ukraine claims are Russian soldiers captured by its forces

The Ukrainian defence ministry and the SBU did not respond to questions from AFP about their methods.

Presidential adviser Oleksiy Arestovich called in an online video for “humane treatment of prisoners”. He reminded viewers that Ukraine’s western partners were watchful on the subject.

Blindfolded with tape, the soldiers were pushed along on a single file, holding one another by the shoulders to keep from falling.

They were then groomed and taken into a room where they were shown videos of Russian bombardments, while a Ukrainian officer named the cities being bombed.

“Look what your army is doing,” the officer said. “They would tell your parents that you died on maneuvers, not that you were here.” Each soldier then faced the cameras and stated his name, his unit, and how he had entered Ukraine.

Each said that he was voluntarily stepping up to condemn Russia’s invasion — using the same phrases as the other soldiers.

Each soldier said he was being well treated and ended by calling on Russians not to believe their President Vladimir Putin’s “lies”.

Russia has not reacted specifically to these appearances, but more generally its defence ministry spokesman Igor Konashenkov on February 27 said Russian prisoners of war were facing “torture”. He compared them to victims of “the German Nazis and their henchmen”.