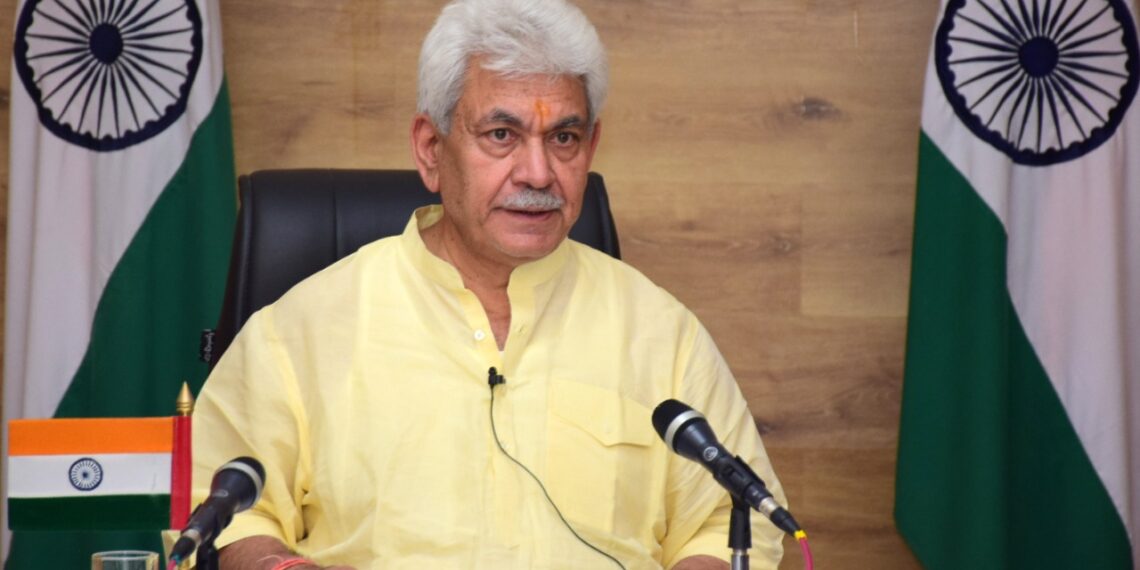 SRINAGAR, SEPTEMBER 18: Lieutenant Governor, Manoj Sinha in the 18th edition of the ‘Awaam Ki Awaaz’ programme termed trust and transparency as the heart of Good Governance.

The concerted effort to generate awareness about government schemes is yielding the desired result. People have become conscious of their rights and duties. Transparency in the administration, efficient implementation of policies has helped in developing a constructive system, he added.

The Lt Governor said, the UT administration is committed to development priorities, improvement of infrastructure in Amrit Kaal Khand.

By following the path of equality and social harmony, we can attain the goal of self-reliant Jammu and Kashmir, the Lt Governor asserted.

Underscoring that the creation of a new progressive society is possible if every individual is sensitive and strives to bring about a positive change, the Lt Governor lauded the efforts of Benit-Ul Islam and Shabnum Masood, two young Civil Engineers from Bandipora, who have come out with a path-breaking solution to prevent cold weather damage to roads. They have used biomedical plastic waste in bituminous road construction to make the roads resilient and economical.

During snowfall in Kashmir Valley, roads are badly damaged causing inconvenience to the people and loss of revenue. These two daughters were worried about it and made sincere efforts to bring change, the Lt Governor said.

The Lt Governor also shared inspiring stories of citizens who are making a positive impact in the lives of others and driving great change in the society.

The story of Neelam Sharma, Sarpanch of Kothian Panchayat of Reasi district is truly inspiring. She is the epitome of women empowerment. She founded Dogra Haat with the help of district administration and encouraged other women to be self-reliant. Her commendable transformative effort is seen as the catalyst for rural development and social empowerment in the region, said the Lt Governor.

The Lt Governor also spoke about the master carpet weavers of two villages Sanglipura and Laxmanpura of Budgam district, who are making 12 carpets for the new Parliament building.

Weavers from Budgam are our pride. The traditional hand-made carpets from Budgam are all set to adorn the new building of the Parliament. It’s a historic opportunity and fitting tribute to J&K’s craftsmanship, the Lt Governor said.

The Lt Governor also acknowledged the determined efforts of progressive farmers Devendra Kumar and Anjum Javed from Rajouri, and Dheeraj Sharma of Kathua, who have started high density plantation of Strawberry and Apple.

The success story of Devendra Kumar and Anjum Javed of Rajouri; and Dheeraj Sharma of Kathua through diversification in agriculture is resonating amongst the farming communities of the adjoining areas, he added.

Referring to a suggestion received from Udhampur’s Nitish Khajuria related to promotion of ‘Shramdaan’ culture and facilitation of workers involved in developmental projects, the Lt Governor said that concerned officers would be sensitized to take necessary action.

The Lt Governor also appreciated inputs received from Jammu’s Ambika Samnotra who had written about Lake Beautification and Riverfront Development and has suggested an integrated plan for all the major rivers and lakes.

Another valuable suggestion was received from Srinagar’s Umar Dewani, who called for promotion and popularization of Glamping domes at various tourist and hiking destinations to give a fillip to the Tourism and Hospitality sector. Similarly, Rajesh Chib from Akhnoor Jammu had written on the need for the involvement of the representatives from the Panchayati Raj Institutions to promote Village Tourism and home stays.

The Lt Governor issued instructions to Mission Youth on the suggestion of Maqsood Ahmed from Kupwara and Shabir Ahmad Shah from Srinagar regarding expansion of LG’s Rolling Trophy.

The Lt Governor also issued instructions to Health Department to study the suggestion of Farooq Ganderbali from Ganderbal, who had written about Medical Tourism in Jammu and Kashmir.

On the occasion, the Lt Governor also extended his greetings to all the citizens on the upcoming pious occasion of Navratri and Durga Puja. He also urged the citizens to mark 2nd October, the birth anniversary of Mahatma Gandhi by taking part in Shramdaan activities in their areas and termed it as a true tribute to Bapu.