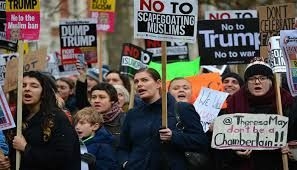 Before the Supreme Court ruled last week that President Trump’s executive order banning travel to the U.S. by citizens from majority-Muslim nations was not discriminatorily aimed at Muslims, the argument had already been won in an unlikely place: the mainstream media.
Since becoming president, Trump has gone out of his way to fulfil a central campaign promise: to bar Muslim immigrants and refugees from entering the country. To improve the chances of this policy passing legal muster, the Trump administration has insisted on framing the executive order as a “travel ban” rather than a “Muslim ban.”
Trump and his supporters have had plenty of help in this endeavour from journalists who continue to describe Trump’s policy of barring various Muslim populations from the U.S. as a “travel ban.” A common assumption at work is that this language is an impartial way to describe Trump’s immigration policy on select Muslim-majority countries.
But let’s be clear: The phrase “travel ban” is neither neutral nor objective. It’s a euphemism, meant to distract the nation from the underlying anti-Muslim bigotry driving the ban. When journalists repeat this language, they become potentially complicit in amplifying Trump’s propaganda and in inscribing anti-Muslim prejudice into federal immigration policy. Neither of these tasks is befitting of the journalistic profession.
It doesn’t help that the Supreme Court, in upholding the ban, has now effectively encouraged both the White House and the media to double down on this language. In what will go down as one of the most troubling decisions in the modern history of the Supreme Court, a majority of justices determined in Trump v. Hawaii that the ban reflects a neutral policy.
Writing for the majority, Chief Justice Roberts argued that Trump’s campaign call for “a total and complete shutdown of Muslims entering the country,” along with Trump’s many anti-Muslim statements and tweets, were of no consequence in determining whether the ban itself violates the principles of religious liberty enshrined in the First Amendment.
As long as the president says he is acting out of national security concerns and doesn’t explicitly call out Muslims in his executive order, he gets a pass on accusations that he is violating the Constitution, not to mention prejudicial statements he’s made in the past. Intent doesn’t matter.
It was left to Justice Sonia Sotomayor to call out Roberts and her other colleagues on the hypocrisy in justifying this policy as neutral or as a mere travel ban. She noted how these same justices had no qualms about focusing on intent in Masterpiece Cakeshop v. Colorado Civil Rights Commission. In that case, the court ruled in favor of a Christian owner of a bakery who refused to serve a same-sex couple.
The court’s majority insisted that the civil rights commission that handled the couple’s complaint had demonstrated bias toward the religious beliefs of the owner. But when it came to a case involving Muslims, the question of bias seemingly became irrelevant.
Sotomayor gave a thorough account of the many anti-Muslim statements that Trump made during his campaign, in addition to his promise for a “total and complete shutdown of Muslims entering the United States.” She pointed to his insistence that “Islam hates us” and that “(w)e’re having problems with Muslims coming into the country.”
She noted that Trump asked one of his advisers, Rudy Giuliani, to find a legal way to enact the ban on Muslims. And when Trump was given opportunities as president to disavow these past statements, Sotomayor pointed out that Trump refused.
Sotomayor’s observations about Trump’s intent arose from the administration’s efforts to adjust the ban each time the federal courts raised roadblocks. To take one example, neither North Korea nor Venezuela was listed in the first two executive orders. The administration added them to the last iteration only to circumvent the legal obstacles presented by the courts, particularly in regards to First Amendment concerns. The addition of two non-Muslim-majority countries to the third ban was arguably window dressing.
“Taking all the relevant evidence together,” wrote Sotomayor, “a reasonable observer would conclude that the Proclamation was driven primarily by anti-Muslim animus, rather than the Government’s asserted national-security justifications.” In other words, by ignoring the obvious intent behind the ban, the court abandoned both reason and the Constitution in order to put the stamp of neutrality onto a bigoted policy.
Intent matters, as do the words journalists use to describe policies emanating from the White House. When journalists repeat the language of “travel ban” without raising critical questions about where this language comes from and how it sanitizes a policy with clear origins in bigotry, they risk serving as a mouthpiece for White House propaganda and repeating the mistakes made by the Supreme Court majority in Trump v. Hawaii.
The time has come to raise the bar for how the ban is discussed and debated. Measured by intent, this is a Muslim ban. If some journalists decide to push back and scrutinize this designation, I think that’s fair. They will find many of us are willing and ready to have this debate.
But journalists must be equally willing to interrogate their own preferences for the “travel ban” designation and to consider the possibility that this language — far from being neutral — can all too easily come across as buttressing the administration’s policies.