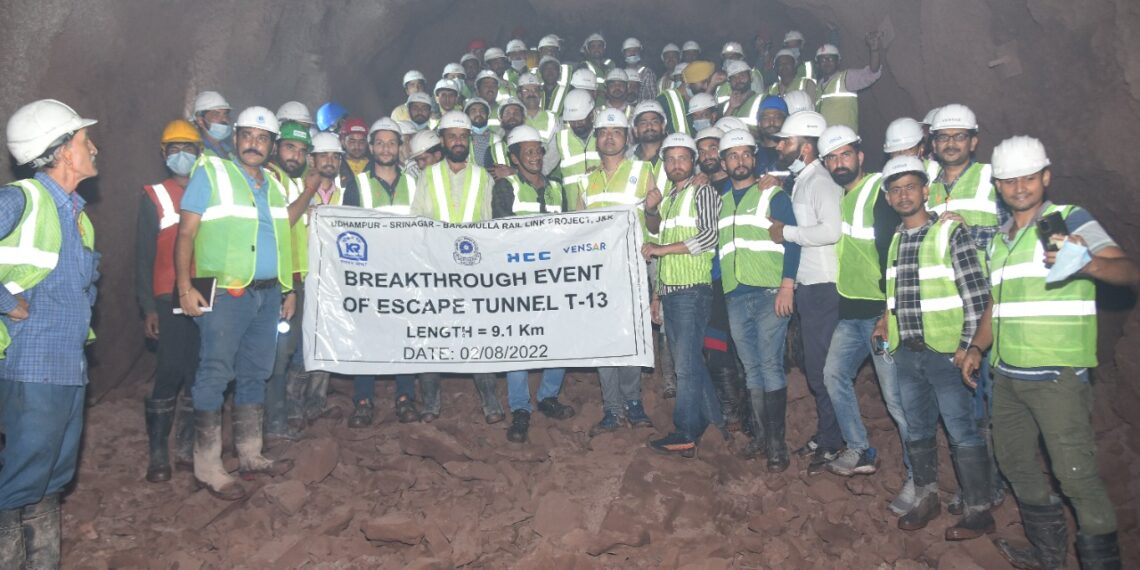 Srinagar: Indian Railway engineers pulled off a rare feat when they executed a break-through of the Escape Tunnel between Dugga and Basindadhar on the Katra-Banihal Section of the Udhmapur-Srinagar-Baramulla Rail line (USBRL).

Named T-13, the tunnel with a length of 9.1 km and 4.6-meter diameter has a modified horseshoe shape.

Ashutosh Gangal, General Manager of Northern Railway, said the breakthrough of this 9.1 km long rescue tunnel has been successfully achieved in 5 years by winning over all sorts of challenges.

As per International railway standards, an Escape tunnel is provided in parallel and has a size relatively smaller than the main tunnel having a length of more than 3 km.

The breakthrough of this escape tunnel has been seen as an achievement of another milestone for this National project in making the dream of connecting the valley to the rest of India a success.

The major challenges faced during the construction of this escape tunnel were hostile terrain & remote location, weak and fractured geology embedded with surprises in the lower Himalayas, inclement weather conditions, and last but not least social problems.

Earlier in January, engineers completed one of the most difficult portions of the main tunnel on the 111-km Banihal-Katra railway line.

Named `T-49B’, the 12.6 km is the longest tunnel on Indian Railways. It is one of the most difficult tunnels to construct given the topography.

Railway engineers achieved a breakthrough when they completed the difficult portion between Kundan Adit and Arpinchala in Khari Tehsil.

Constructed with the New Austrian Tunneling Method in the Ramban district, the tunnel on completion would have double tracks. An official said the tunneling was done with utmost care considering geological challenges.

In December last year, Indian railway engineers achieved another breakthrough when they managed to drill the most crucial tunnel in the Bankot area of Banihal.

IRCON International Limited has completed most of the excavation work of railway tunnels between Banihal and the Khari sector. A part of the 272-km Udhampur-Srinagar-Baramulla rail line (USBRL), the project aims to provide an alternative surface link between Kashmir and the rest of the country.

According to an official, the 2-km-long tunnel project at Bankot is being constructed for Rs 300 crore in two parts. The 53-kilometer-long railway line’s 96% passes through underground tunnels and land measuring over 11,000 kanals (an area of 550 hectares) has been handed over to the authorities.

For the first time, a road-header machine is being used in the excavation of railway tunnels in Kashmir. Thanks to the machine, there is no need for conducting blasts, which sometimes damage the nearby residential houses.

Of the 272-km USBRL project, the work on 161 km was commissioned in phases. The first phase of the 118-km Qazigund-Baramulla section was commissioned in October 2009, followed by the 18-km Banihal-Qazigund in June 2013 and the 25-km Udhampur-Katra in July 2014.