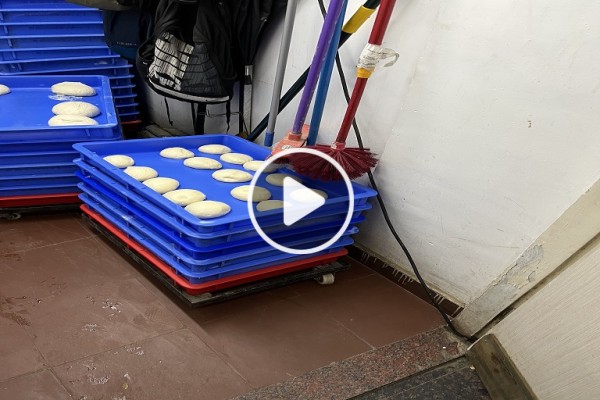 Domino’s India is receiving a lot of social media flak after pictures of trays with Pizza dough mixed with toilet cleaner brush, mops, and clothes hanging on top of them went viral.

A Twitter user Tushar shared pictures on social media which, he claims, are from Domino’s, Bengaluru. It shows toilet brush, mops and clothes hanging on top of trays with pizza dough in them.

The pictures show trays of pizza dough stacked on top of one another. What grabbed the netizens’ attention were the brooms, mops and clothes hanging above them.

Tushar shared the pictures and urged everyone to choose homemade food over store-bought items. “Photos from a Domino’s outlet in Bengaluru wherein cleaning mops were hanging above trays of pizza dough. A toilet brush, mops and clothes could be seen hanging on the wall and under them were placed the dough trays. Please prefer homemade food,” the photo caption reads.

The original post was shared by Sahil Karnany whi shared the pictures as well as the video of the outlet.

The pictures have left many pizza connoisseurs absolutely disgusted. Twitter users urged authorities to take strict actions against them. A user also shared the video which shows the terrible conditions in which the food is prepared.

Check out some of the comments below:

After facing online flak, Domino’s India responded to the incident. The pizza company said that it ensured its patrons that the franchise maintains the “highest standards of hygiene and food safety”.

“We adhere to stringent world-class protocols for ensuring the highest standards of hygiene and food safety. We have zero tolerance for violations of these operating standards. The incident brought to our notice will be thoroughly investigated and basis the findings, appropriate measures will be rolled out. Rest assured we remain committed to doing everything necessary towards ensuring the safety and well-being of our customers,” Dominos’ statement reads.